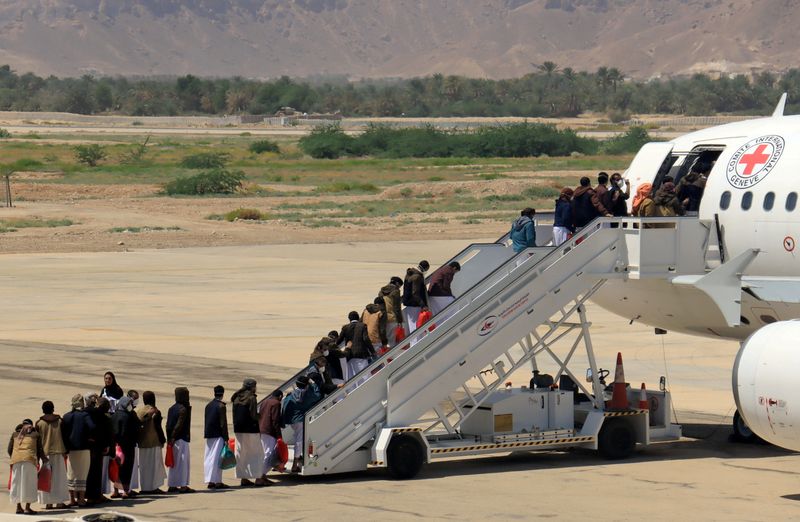 © Reuters. Houthi prisoners board a plane before heading to Sanaa airport after being released by the Saudi-led coalition in a prisoner swap, at Sayoun airport

SANAA/ADEN (Reuters) – Planes carrying prisoners to be exchanged by Yemen’s warring parties took off on Friday on the second day of an operation to return about 1,000 men home and help build momentum for a new push to end a catastrophic war.

A Saudi-led military coalition, which supports the internationally recognised Yemeni government, and Yemen’s Iran-aligned Houthi movement agreed last month in Switzerland to exchange 1,081 prisoners, including 15 Saudis, in the largest swap of its kind in the five-year-old conflict.

More than 700 prisoners were exchanged on Thursday as the operation started, said the International Committee of the Red Cross, which is managing the process.

An ICRC plane took off on Friday morning from Aden city, the temporary capital of the Yemeni government, ferrying detainees to the Houthi-controlled capital Sanaa, a Reuters witness and the ICRC said.

It was carrying 101 Houthi prisoners, an ICRC spokesperson said.

At the same time, an ICRC plane took off from Sanaa airport carrying 76 prisoners to Aden, the ICRC spokesperson said. Houthi-run al-Masirah TV said two planes would depart from Sanaa on Friday carrying around 150 prisoners in total.

Men descending from the plane when it landed in Aden prostrated and kissed the tarmac. Some embraced waiting friends and relatives.

Around 355 prisoners are expected to be exchanged on Friday, Al Arabiya TV said.

U.N. Yemen envoy Martin Griffiths told the Security Council on Thursday the swap was an “airlift of hope”, adding that both parties remain in negotiations for a permanent ceasefire, which he hoped could be agreed by the end of the year.

The warring sides had agreed in 2018 to swap 15,000 detainees split between both sides to pave the way for political negotiations to end the conflict, but progress has been slow.

Yemen has been at war since the Houthis ousted the internationally recognised government from power in Sanaa in late 2014, prompting the coalition to intervene in 2015.