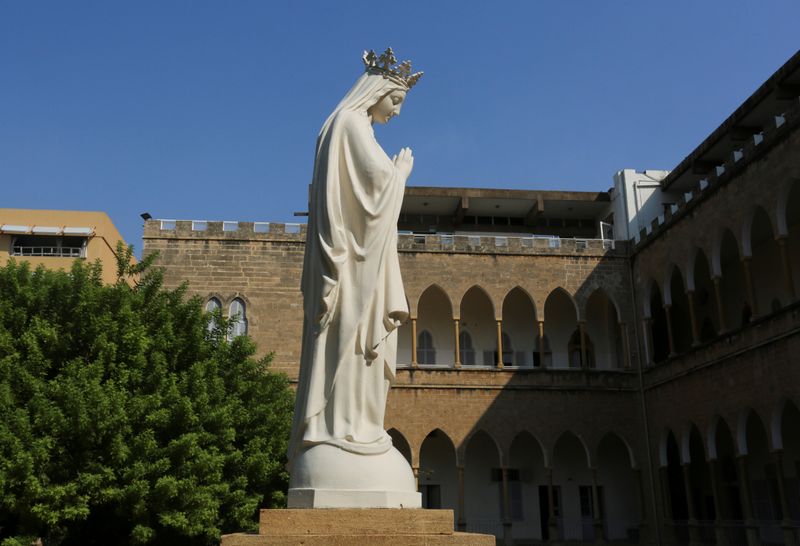 © Reuters. A view shows a statue of Virgin Mary at College Notre Dame de Nazareth which was damaged due to the explosion at the port area, in Beirut

By Issam Abdallah and Imad Creidi

The principal’s office has been damaged and the doors and windows of the chapel blown off. The statue of the Virgin Mary in the yard has remained intact, however, watching over workmen toiling to fix buildings.

These are the scenes as students wait to start a new academic year.

The huge explosion in Beirut’s port on Aug. 4 did not spare the Lebanese capital’s schools as it laid waste to swathes of the city.

Rebuilding poses yet another challenge to an education system already reeling from an economic crisis and the coronavirus pandemic.

“I can’t adapt to it as I adapted to other problems. We don’t have classrooms, offices or halls. There is nothing standing, I have nowhere to bring in students,” said Notre Dame principal Sister Magida Fheili.

Many of the school’s buildings were left with no windows, no doors and broken walls.

More than 200 education institutions – public and private schools and technical colleges – were damaged by the explosion, said Maya Semaha, the Education Ministry’s head of engineering.

Of those, 25 were severely damaged and some might need more time to fix than what is left until the academic year kicks off, she said.

NO MONEY FOR FEES

While some private schools have started with online classes, Lebanon’s official back-to-school date – originally set for Sept. 28 – has been postponed until Oct. 12 after a surge in coronavirus cases in the Mediterranean country.

Curriculums were reduced to almost half so schools could complete them in a hybrid way, Education Ministry media advisor Albert Chamoun told Reuters. Lessons are expected to be a mix of online courses and in-person teaching, he explained.    But some establishments, like Nazareth and the Sagesse Beirut school, do not yet have the option of going back to the classrooms.     “We are a big school with a lot of classes, we surely can welcome (students) during coronavirus by separating classes,” said Father Charbel Massaad, president of Sagesse school. “But our problem is not coronavirus now, it is the rebuilding.”

As he spoke, workers were rebuilding a disintegrated wall.

Massaad underlined the urgency of the restoration process and distribution of aid to schools before winter, so students can find stability to pursue their learning.

According to Semaha, money to repair public schools has now been secured through various international donors, while aid is still being gathered to help private schools.

But parents are also facing financial difficulties due to the collapse of Lebanon’s economy. Rising book prices and poverty levels have left some families unable to pay, pushing students from private to public institutions or even leaving children out of schools.     Books will be available online to download for free, Chamoun said, though he acknowledged that many citizens cannot afford to buy laptops or tablets. He said the ministry was working on collecting donations and aid to provide electronic devices for students in public and private schools as the state does not have the means to secure them.     Sister Magida, whose school did not close during Lebanon’s 1975-90 civil war, expected that half the parents of her students would not be able to pay the fees this year.     “Nothing works. We are working in very difficult circumstances trying to survive. The existence of schools is surely in danger, as is their education level,” she said.

“In my opinion, all Lebanon is in danger.”