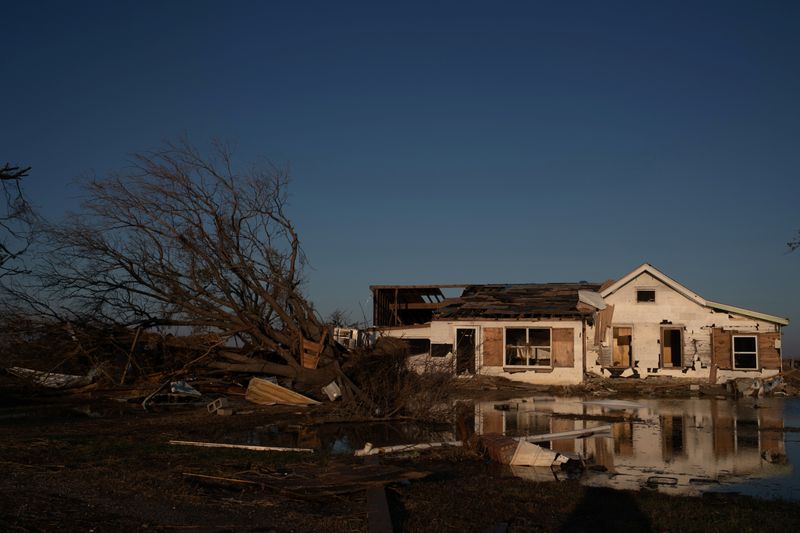 © Reuters. FILE PHOTO: A destroyed home is reflected in flood waters in the aftermath of Hurricane Delta in Creole, Louisiana

LAKE CHARLES, La. (Reuters) – Louisianans continued storm cleanup on Sunday after Hurricane Delta rolled through the region on Friday, as more returned to survey damage to their homes, having waited out the storm elsewhere.

Delta made landfall near the town of Creole in Cameron Parish early Friday evening as a Category 2 hurricane, packing sustained winds of 100 miles per hour (160 km per hour).

By Sunday, the storm had weakened to a post-tropical cyclone, but continued to be a heavy rainfall threat, the National Hurricane Center said.

The storm knocked out power for more than half a million customers and compounded damage from the more powerful Hurricane Laura, which devastated the region in August.

Gerard Meschwitz, 62, returned to Lake Charles on Sunday morning after evacuating to Houston for the storm. He found that Delta had torn up more of his roof, which was already damaged by Laura.

Meschwitz said he delayed his return until Sunday instead of the day before to avoid traffic from other returning evacuees.

Meanwhile, some residents prepared to leave the region on Sunday.

Though Sam Jones, 77, waited out the storm in his Lake Charles home, he was planning to head out on Sunday to stay with his son in Fort Worth, Texas, because his electricity was out. Jones had only recently had his power restored after Laura.

“I don’t see any electricity coming back anytime soon, so I’m going to give them about a week and then come back,” he said. “When you can’t put any air on, it puts you to where you don’t get a good night sleep.”

His neighbor, who evacuated to Moss Bluff ahead of the storm, came back on Saturday to grab essentials before leaving again because her power was also out.

Many residents in Lake Charles and elsewhere left before the storm. As of Sunday morning, 9,109 Louisianans were still in shelters, with more than 8,200 of the evacuees in hotels and in the Alexandria “mega” shelter, according to Catherine Heitman, spokesperson for the Department of Children and Family Services.

Hurricane Delta also cut most U.S. offshore Gulf of Mexico oil output and 62% of , the Department of Interior reported.

Insured losses from Delta are estimated to be around $2 billion, while Laura’s losses were estimated at around $10 billion, including over $2 billion to offshore energy production facilities, said Steve Bennett, chief product officer for The Demex Group, a technology company.

Insured losses from natural catastrophes have been rising steadily over the past several decades, as a result of climate change and population growth, Bennett said.