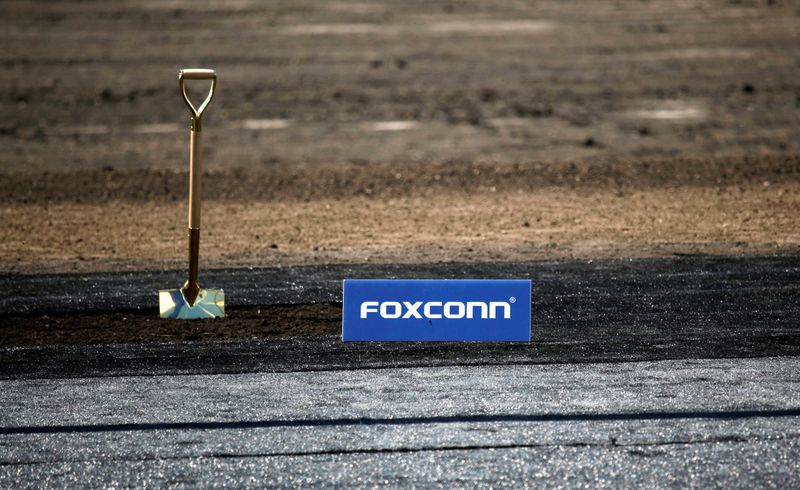 © Reuters. Shovel and FoxConn logo are seen before the arrival of U.S. President Donald Trump for the Foxconn Technology Group groundbreaking ceremony in Mount Pleasant

CHICAGO (Reuters) – A Wisconsin factory hailed by President Donald Trump as proof he was reviving U.S. manufacturing did not create enough jobs in 2019 to earn its owner Foxconn Technology Group tax credits, the state said on Monday, the second year it has missed its targets.

In a letter to the Taiwan-based company’s Vice Chairman Jay Lee, Wisconsin’s economic development agency said Foxconn was a long way away from building the large TV screens it had proposed in 2017, when it promised to eventually create 13,000 jobs in the state.

The planned $10 billion, 20-million-square-foot campus was hailed by the White House as the largest investment for a brand new location by a foreign-based company in U.S. history.

But for many the factory has become a symbol of failed promises in Midwestern states like Wisconsin that were key to Trump’s 2016 election and are now closely watched swing states in the Republican’s bid to be re-elected on Nov. 3.

Wisconsin’s Democratic Governor Tony Evers, who inherited a deal from his Republican predecessor to give Foxconn $4 billion in tax breaks and other incentives when he took office in 2019, has sought to renegotiate the state’s contract with the firm.

Foxconn said in a statement it employed more than the minimum 520 full-time workers by the end of the year to get the credit.

“WEDC’s determination of ineligibility during ongoing discussion is a disappointment and a surprise that threatens good faith negotiations,” it said.

WEDC’s review found Foxconn had fewer full-time employees than the minimum, however. It also fell short of its employment goal in 2018.

“Once Foxconn is able to provide more accurate details of the proposed project, such as its size, scope, anticipated capital investment, and job creation, WEDC would be able to offer support for the project with tax incentives,” wrote Missy Hughes, WEDC’s secretary & chief executive officer.