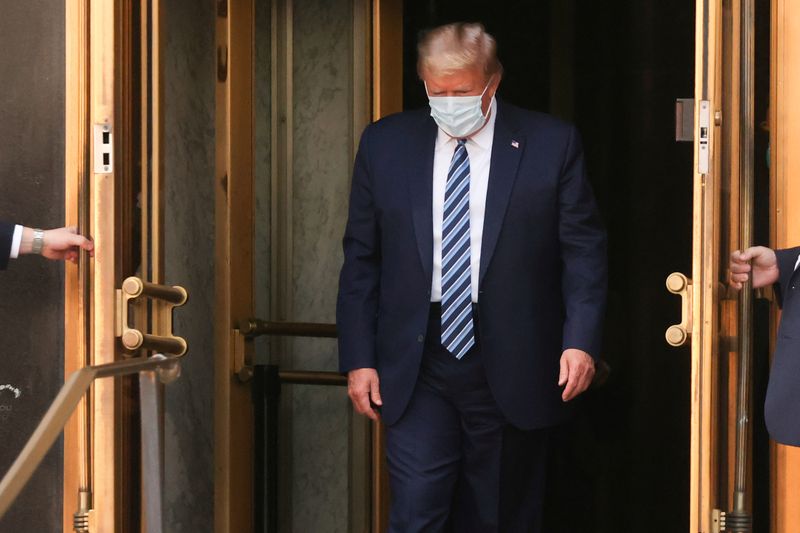 (Reuters) – U.S. President Donald Trump revealed early on Oct. 2 that he had tested positive for the coronavirus, but several questions about the course of his illness remain unknown. The following is some of what is known and what is still unclear about the president’s bout with COVID-19.

Who infected President Trump when?

These are both questions that have not been answered as the White House has repeatedly refused to say when the president last tested negative for the coronavirus – information essential to tracing the timeline of when and where he was likely infected.

Health experts say the timing of his positive test results suggest he likely contracted the illness in late September. On Sept. 26, Trump hosted a ceremony in the White House Rose Garden to announce his Supreme Court nominee, Amy Coney Barrett. The mostly outdoor event was attended by more than 100 people, most not wearing masks and with no social distancing. Whether Trump was infected at the event or infected others there is unknown. At least eight attendees, including the president, first lady and some top aides, tested positive afterwards, the New York Times reported.

Trump may have contracted the virus from a member of his staff. On Oct. 1, White House aide Hope Hicks was diagnosed with COVID-19 and began to self-isolate. Hicks travels regularly with the president on Air Force One and accompanied him to Ohio for the presidential debate the previous Tuesday and to Minnesota for a campaign event on Wednesday. Several other members of his staff, including senior White House adviser Stephen Miller, have since tested positive for COVID-19. Some experts said Trump’s symptoms and those experienced by Hicks first appeared too close together to make it likely that Hicks infected the president.

It generally takes 5 to 7 days after infection for COVID-19 to be detected on a typical molecular diagnostic test, said Otto Yang, a physician at UCLA Health. The Wall Street Journal reported Trump first tested positive on a rapid test used for screening White House staff earlier on Thursday that was later confirmed by a more accurate lab test. He did not disclose his positive test until about 1 am ET (0500 GMT) after the news broke that Hicks had tested positive.

Was the president seriously ill?

Trump was ill enough to cause concern among his doctors and to convince him he should be treated at a hospital and not at the White House. Several pieces of evidence indicate Trump may have been seriously ill, but his aides and medical team have provided conflicting information. Sources told Reuters he suffered a mild fever and his doctor at the time said he was “fatigued but in good spirits.” At briefings, his doctor gave unusually rosy reports while avoiding specific questions that would give a much more clear picture of Trump’s condition. For example, they declined to discuss his lung scans or say whether he had pneumonia or whether blood tests showed markers for inflammation, a sign of more serious illness.

Trump was hospitalized at Walter Reed National Military Medical Center in Maryland from Friday, Oct. 2 to the following Monday and had two known instances of low oxygen levels, a sign of more serious illness. He received many of the medicines that have shown some efficacy against COVID-19 in clinical trials, painting a confusing picture of how severely ill he may have been, physicians told Reuters.

He received an experimental dual antibody therapy developed by Regeneron Pharmaceuticals Inc (O:) that is so new it does not yet have an official name. That treatment can be given early in the course of the disease. He also received a five-day course of Gilead Sciences Inc ‘s (O:) antiviral remdesivir, which is often used for severely ill patients but can be given early in the illness. And he is taking the steroid dexamethasone, which experts have said should be reserved to prevent death in severely ill COVID-19 patients. Because the steroid suppresses the immune system’s natural response, it can actually worsen a more mild illness, Yang said.

Trump’s physician said blood samples taken on Monday show the president had protective antibodies, but those were likely the Regeneron antibodies rather than a natural response, the company and other health experts said.

In a series of videos this week, Trump proclaimed himself cured, possibly immune, and touted the benefits of the Regeneron therapy. U.S. infectious disease chief Dr. Anthony Fauci noted on Thursday that we do not know if the president is well, because patients can unexpectedly go downhill more than a week after symptoms begin.

Has the president infected anyone?

The U.S. Centers for Disease Control and Prevention recommends that patients avoid contact with others for 10 days after the onset of symptoms. That means Trump should assume he is contagious through Saturday, Oct. 10, if he was first symptomatic on Oct. 1.

People are believed to be at their most contagious in the days just before symptoms arise. Since it is not known when Trump last tested negative, he could have been spreading the virus for days before testing positive. Trump put some of his Secret Service detail at risk on Oct. 1, when he left the hospital in a motorcade to wave to supporters, experts said. He and others in his car wore masks but were in close proximity in the hermetically sealed vehicle. Upon returning to the White House, Trump immediately removed his mask for photo ops, potentially putting those around him at risk.

On Thursday, the president said he is no longer contagious, which some experts say is unlikely. The White House has not said whether he has tested negative.