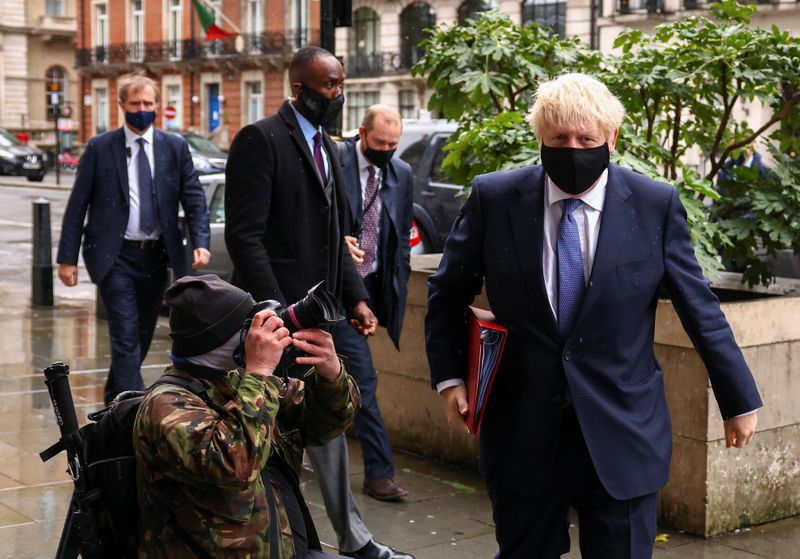 LONDON (Reuters) – British Prime Minister Boris Johnson does not particularly wish for the Brexit transition period to end without a new trade deal in place but believes that Britain could live with such an outcome, he said on Sunday.

With the Dec. 31 expiry of the transition period fast approaching, Johnson and the head of the EU’s executive, Ursula von der Leyen, agreed in a phone call on Saturday to step up negotiations on a post-Brexit deal.

“I think it’s there to be done,” Johnson said during an interview on BBC television.

“Alas, there are some difficult issues that need to be fixed, and there’s no question that the EU needs to understand that we’re utterly serious about needing to control our own laws and our own regulations, and similarly they need to understand that the repatriation of the UK’s fisheries … is very important.”

Asked whether he was worried about the potential impact of a no-deal situation in the middle of the COVID pandemic, Johnson said: “I don’t want the Australian WTO-type outcome, particularly, but we can more than live with it.

“I think the people of this country have had enough … of being told that this will be impossible or intolerable. I think we can prosper mightily under those circumstances.”

The government last week told importers and exporters they would have to complete extra paperwork whether there was a deal or not and that a lack of preparation on their part could lead to 100 km queues of trucks.

That prompted accusations from the opposition that ministers were setting up industry to take the blame for any chaos that might follow a botched Brexit.

The EU says that any deal must be sealed by the end of October, or in the first days of November at the latest, to leave enough time for ratification by the bloc before the end of the year.

More trade talks are due in London next week and in Brussels the following week before the 27 national EU leaders meet over Oct. 15-16 to assess progress. London has also said it wants clarity by Oct. 15 on whether a deal is possible or not.

An estimated trillion euros ($1.17 trillion) of annual trade would be at stake if they fail to reach an agreement.