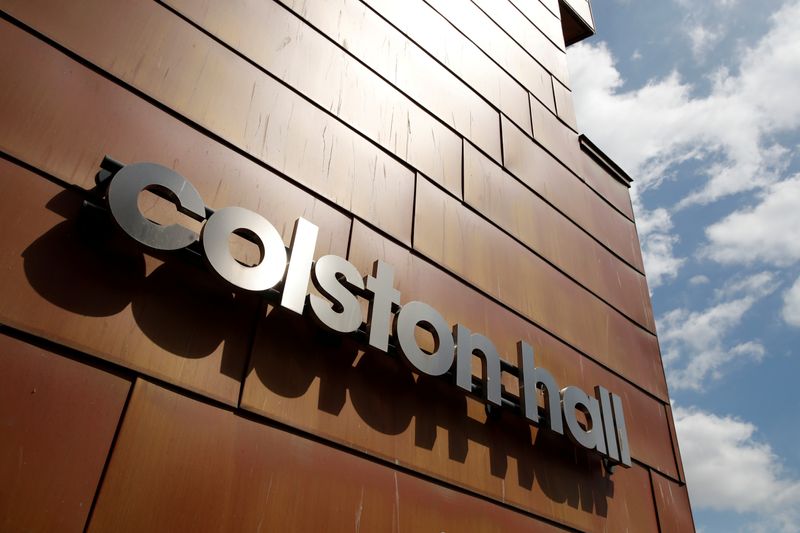 © Reuters. FILE PHOTO: People observe the base of the statue of Edward Colston

LONDON (Reuters) – A concert hall in the English city of Bristol that was named after 17th century slave trader Edward Colston has renamed itself the Bristol Beacon saying the long-debated change was aimed at making everyone feel welcome.

The concert hall was one of several places in Bristol named after Colston, who donated money he had made investing in the transatlantic slave trade to charitable causes in the city – a legacy that had caused disquiet and division for years.

The temperature of the debate was abruptly raised in June, when protesters inspired by the Black Lives Matter movement tore down a statue of Colston and threw it into Bristol harbour.

The government called the toppling a criminal act and critics accused the protesters of seeking to erase history. Supporters countered that the city had been debating Colston for years but getting nowhere, while the slave trader’s name and image were an insult to many of the city’s residents.

The process at the concert hall, which decided in 2017 to change its name and conducted in-depth consultations with a large number of people across the city, was less chaotic, although it was also acrimonious at times.

“It’s been quite a rough ride. Not everyone agreed with the decision to change,” said Louise Mitchell, chief executive of the trust which runs the venue, at a live-streamed launch event for the new name on Wednesday.

“We were accused of seeking to erase and censor history. We were told that we were wrong to use the morals of today to judge the actions of the past. It’s an issue that continues to provoke strong views on every side.

“The truth is the organisation and the city can’t continue to be held back by this historic association. The name has meant that the building is a place where some have felt unwelcome, or that they did not belong, be they artists or audiences, and very simply, if we can’t be for everyone, something has to change.”

As Colston Hall, the venue hosted world-famous musicians like the Beatles and Jimi Hendrix, but a growing number of Bristolians refused to go there because of the name. The band Massive Attack, who hail from the city, had boycotted the venue.

Mitchell said the new name aimed to celebrate the “unity and joy of live music”.