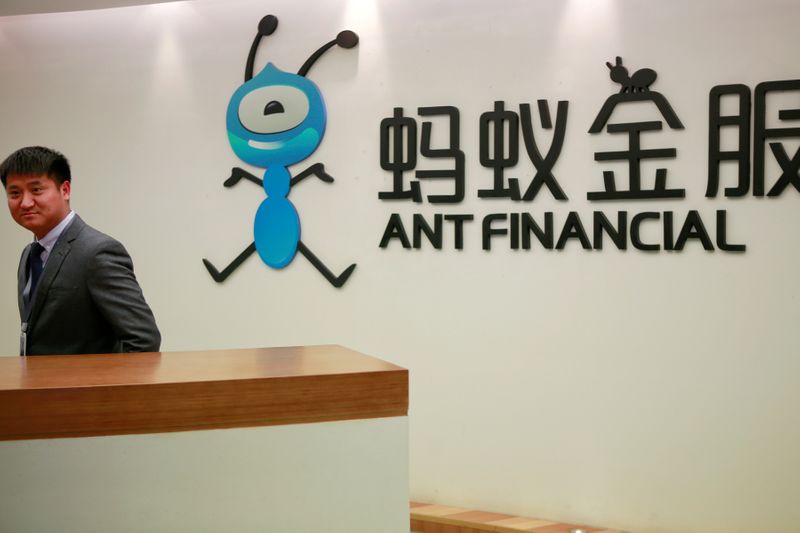 © Reuters. FILE PHOTO: Employee stands next to the logo of Ant Financial Services Group at its headquarters in Hangzhou, China

“It’s outrageous that Wall Street is rewarding the Chinese Communist Party’s blatant crackdown on Hong Kong’s freedom and autonomy by orchestrating Ant Group’s IPO on the Hong Kong and Shanghai stock exchanges,” Rubio, a Republican, said in a statement to Reuters.

“The Administration should take a serious look at the options available to delay Ant Group’s IPO,” he added.

Ant Financial did not immediately respond to a request for comment.

It was not immediately clear how the U.S. government could postpone the listing of a Chinese company abroad. But Rubio’s remarks are a sign of growing pressure among China hardliners in Congress, within the administration and elsewhere for President Donald Trump to sanction Ant Financial before it lists later this month.

Some fear the offering, worth up to $30 billion, could expose scores of U.S. investors to fraud while others fear it could give the Chinese government access to sensitive banking data belonging to U.S. citizens.

“These digital payment systems are the source of well-founded national security concerns, and the Trump administration should move to protect American users’ sensitive financial data as quickly as possible,” Republican Congressman Jim Banks said in a statement when asked whether the administration should impose sanctions on the company.

The company could be the latest victim of a years-long technology battle between Beijing and Washington, that saw the Trump administration lash out at such Chinese companies as telecoms giant Huawei and surveillance camera maker Hikvision over everything from intellectual property theft, to breaches of sanctions and human rights abuses.

Rubio was the first to publicly call for a probe into popular Chinese-owned social media app TikTok by a powerful national security committee, which did review it. The administration ultimately banned the app, but a court-imposed injunction pending review has kept it from going into effect.