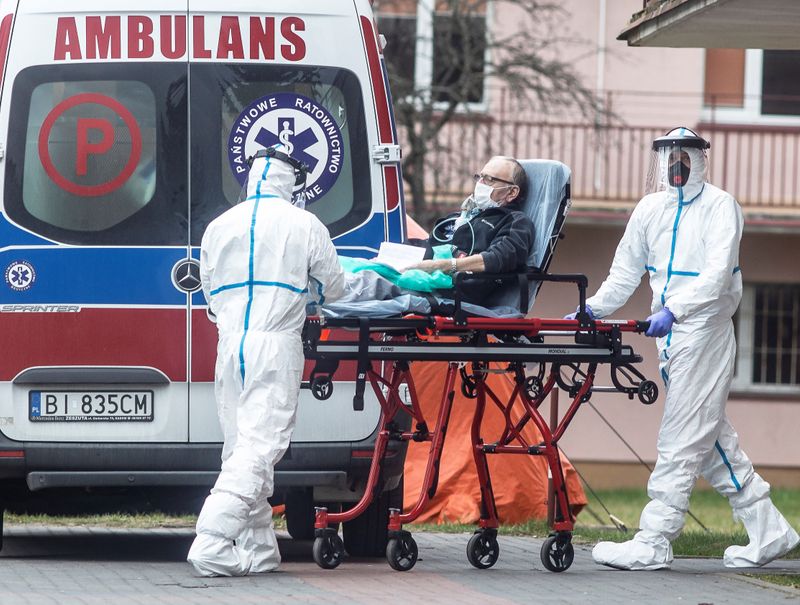 © Reuters. Medics bring a patient suspected of coronavirus disease (COVID-19) case, to a hospital in Bialystok

NEW YORK/AMSTERDAM (Reuters) – Nearly two-thirds of U.S. states were in a danger zone of coronavirus spread and six, including election battleground Wisconsin, reported a record one-day increase in COVID-19 deaths on Wednesday while the pandemic’s resurgence in Europe strained hospitals.

Coronavirus deaths hit fresh daily records in Hawaii, Kansas, Iowa, Minnesota, Montana and Wisconsin, a state that also reported a record daily increase in new cases together with Colorado, Illinois, Kentucky and Ohio, according to a Reuters analysis.

Wisconsin Governor Tony Evers announced that a field hospital in the Milwaukee suburbs admitted its first COVID-19 patient since it opened last week.

“Folks, please stay home,” Evers said. “Help us protect our communities from this highly contagious virus and avoid further strain on our hospitals.”

European case numbers, which were brought largely under control by the unprecedented lockdowns in March and April are also surging, and authorities in countries from Poland to Portugal expressed mounting alarm at the renewed crisis confronting their health infrastructure.

Belgium, struggling with what its health minister called a “tsunami” of infections, is postponing all non-essential hospital procedures, and similar measures are looming in other countries.

“If the rhythm of the past week continues, rescheduling and suspending some non-priority activities will become unavoidable,” said Julio Pascual, medical director at Barcelona’s Hospital del Mar.

A Belgian official said another lockdown could be imposed as soon as next week in the country, which has one of the world’s highest fatality rates per capita.

The coronavirus pandemic, which has killed more than 221,000 people in the United States and thrown millions out of work, has taken a toll on Trump’s re-election prospects. Negotiations on a new package of coronavirus economic aid have dragged on and a deal appeared unlikely before the Nov. 3 election.

Thirty-two of 50 states have entered a danger zone with more than 100 new cases per 100,000 residents over the past week, and nationally the case rate has reached its highest level since a peak in July, Reuters found.

A block of states in the Midwest and Mountain regions from Idaho to Illinois were a red zone along with Alaska, denoting rapidly rising infection.

Nationally, cases have been trending higher for five weeks, rising to 60,000 on average over the past seven days from a recent low of 35,000 a day in mid-September.

U.S. public health experts have warned for months that a premature rollback of social-distancing policies and politicizing the wearing of masks could trigger a resurgence of infections.

“We are not far from the period of exponential, explosive growth of #covid19 in the U.S.,” said Dr. Leana Wen, former Baltimore health commissioner, on Twitter.

The Centers for Disease Control and Prevention on Wednesday tightened its definition of “close contact” exposure that puts an individual at risk, a standard that triggers contact tracing and could have an impact on schools and workplaces.

Rather than spending 15 minutes at once within 6 feet (1.8 meters) of an infected person to be considered close contact, the agency said the definition is now 15 minutes over 24 hours.

Dutch health authorities said that if the number of COVID-19 patients in hospital wards continues to grow, three-quarters of regular care may have to be scrapped by the end of November, and there were similar warnings from Czech authorities.

“We have hit a wall on clinical beds,” said Wouter van der Horst, spokesman for the Dutch hospital association NVZ.

To complicate Europe’s situation, widespread coronavirus fatigue and the frightening economic impact of the crisis have eroded broad public support for the lockdowns ordered earlier in the year to stop health services from being overwhelmed.

Unwilling to shut down their countries again, governments have sought less drastic measures to limit public gatherings and balance the need to keep their economies turning with holding back the pandemic.

According to the European Centre for Disease Prevention and Control (ECDC), Europe has registered more than 5 million cases and 200,000 deaths, with new cases beginning to spike sharply from the end of September.

While well below levels at the peak of the crisis six months ago, COVID-19 hospital admissions and occupancy are again high – defined as at least 25% of the peak of the pandemic – or rising in 20 countries, its latest weekly summary said last week.

Authorities in Lombardy, the Italian region at the center of the earlier wave, on Wednesday ordered the reopening of special temporary intensive care units set up in Milan and Bergamo that were shut down earlier in the year when case numbers receded.

Already, a number of regional health authorities in Germany, one of the countries that dealt with the first wave most effectively, have agreed to take in intensive care patients from other countries.

On Wednesday, authorities in Ireland, where the five-day case average has tripled since the start of October, said there were no longer enough officials to keep its contact-tracing system working.