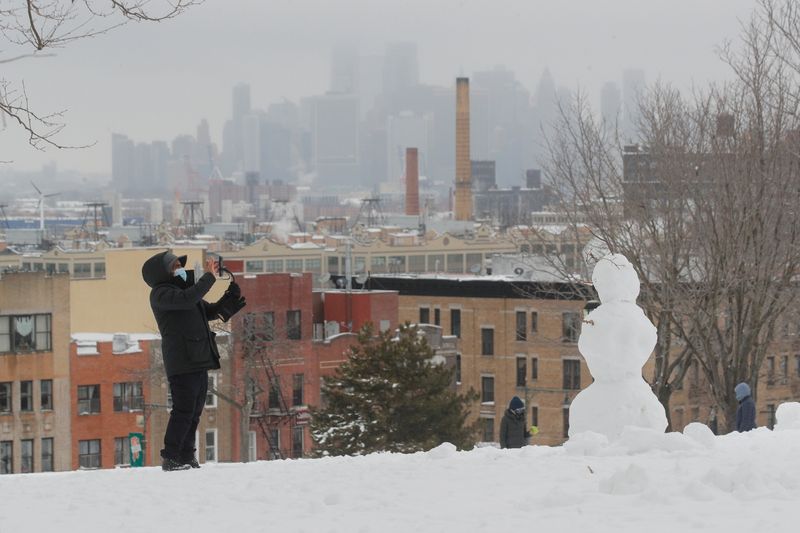 (Reuters) -People across the U.S. Northeast were digging themselves out on Tuesday after a powerful storm blanketed parts of the region with more than 2 feet of snow, prompting airlines to cancel flights and contributing to at least two deaths.

The nor’easter – an East Coast storm whose winds blow from the northeast – cut power to thousands of households, and halted some subway and train service in and around New York City. It dropped about 30 inches (76 cm) of snow in parts of New Jersey and Pennsylvania and up to 18 inches (46 cm) in New York City.

The snowy weather was expected to continue in parts of the Northeast, with a stretch from upstate New York to northern Maine hit the hardest, the National Weather Service said in its latest forecast on Tuesday. Snow could develop in the Upper Midwest on Wednesday before the storm runs its course, it said.

In Allentown, Pennsylvania, a 67-year-old woman suffering from Alzheimer’s disease was found lying dead in the snow on Monday after wandering away from her home, police said.

A man in Newark, New Jersey, died after being found lying in the snow on Monday, according to police officials, who said the death was not considered suspicious.

In New York City, public transit was coming back to life. Outdoor subway service, which had been suspended, resumed, buses were running on reduced schedules, and the area’s major commuter railroads had resumed partial or full operations.

The city’s LaGuardia Airport and John F. Kennedy International Airport, where flights were canceled on Monday, both said they were working to clear the snow and that they expected activity to pick up later on Tuesday.

The storm prompted widespread closings of schools and COVID-19 vaccination sites. In Connecticut, about 10,000 vaccination appointments were canceled on Monday, with plans to reschedule them for later this week.