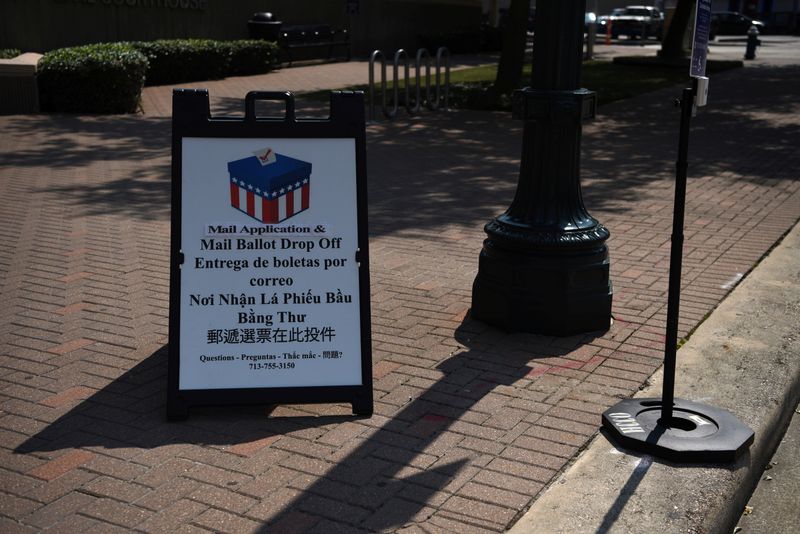 By Jennifer Hiller and Jan Wolfe

HOUSTON (Reuters) – A federal judge in Texas will consider on Monday whether Houston officials should throw out about 127,000 votes already cast in the U.S. presidential election at drive-through voting sites in the Democratic-leaning area.

U.S. District Judge Andrew Hanen was set to hear an emergency bid at 10:30 a.m. local time (16:30 GMT) by a Republican state legislator and others who accuse Harris County Clerk Chris Hollins, a Democrat, of exceeding his constitutional authority by allowing drive-through voting as an alternative during the coronavirus pandemic.

Harris County, home to the city of Houston and about 4.7 million people, is the third-most populous county in the United States. It currently has 10 drive-through polling sites, which are available to all voters.

Sarah and Dan Jones were among the protesters outside of the federal courthouse in Houston on Monday morning, and brought their four children, ages 10 to six months.

They voted at a drive-through site a few weeks ago and found out Saturday their ballots were being challenged, they said.

Both voted for Biden. Dan Jones, 38, said he also voted for Hemphill, one of the plaintiffs.

“I voted for her and she’s trying to get my ballot thrown out,” he said.

A lawyer for Hotze, Jared Woodfill, said on Sunday the plaintiffs may eventually take their fight all the way to the U.S. Supreme Court.

Hundreds of legal challenges have been brought in the months leading up to the Nov. 3 election over how Americans can cast their ballots. Democrats have generally tried to ease access to mail-in and other alternatives to in-person voting, while Trump has repeatedly made unfounded attacks on mail-in voting, claiming it leads to fraud.

Hanen was appointed by President George W. Bush, a Republican.

Groups including the American Civil Liberties Union are asking to intervene in the litigation, saying the plaintiffs want to undermine the election and suppress votes.

“They are simply trying to see what frivolous argument they can make to try and invalidate votes,” Harris County’s top administrator, Democrat Lina Hidalgo, said on Sunday.

Michael Morley, a professor of election law at Florida State University, said he believes that the county has a strong legal basis under state law for implementing alternative voting methods during the pandemic.

“Even if the court disagreed, however, a remedy would most likely be purely prospective – prohibiting continued use of these mechanisms while still counting votes already cast,” he said.