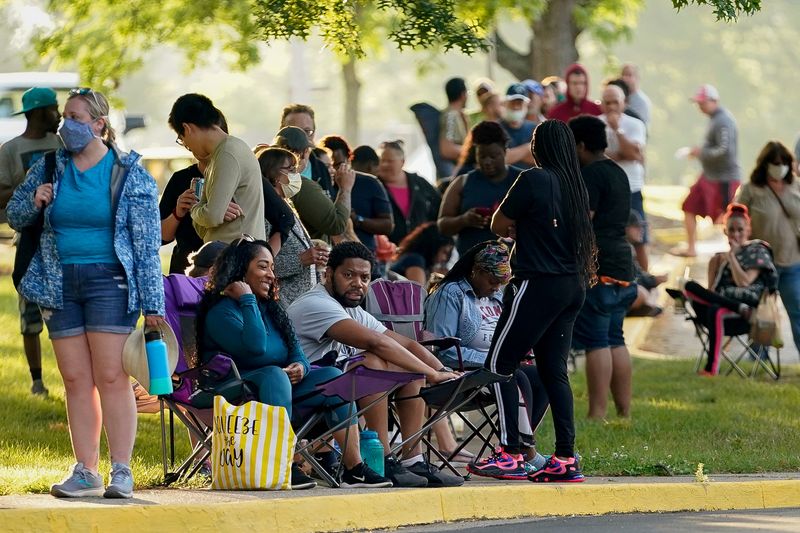 WASHINGTON (Reuters) – U.S. employers likely hired the fewest workers in six months in November, hindered by a resurgence in new COVID-19 cases that, together with a lack of more government relief money, threatens to reverse the recovery from the pandemic recession.

The Labor Department’s closely watched employment report on Friday will only cover the first two weeks of November, when the current wave of coronavirus infections started. Infections, hospitalizations and death rates have sky-rocketed, leading some economists to anticipate a drop in employment in December or January as more jurisdictions impose restrictions on businesses and consumers shun crowded places like restaurants.

“The November employment report may be the last ‘strong’ employment report for a while until a vaccine is widely available,” said Sam Bullard, a senior economist at Wells Fargo (NYSE:) Securities in Charlotte, North Carolina. “The labor market is showing increased signs of stress, which could manifest itself into smaller monthly hiring gains over the winter months.”

Nonfarm payrolls likely increased by 469,000 jobs last month after rising by 638,000 in October, according to a Reuters survey of economists. That would be the smallest gain since the jobs recovery started in May and a fifth straight monthly deceleration in job gains, leaving employment 9.621 million jobs below its February peak.

It would be in line with reports on consumer spending, manufacturing and services industries that have suggested a slowdown in the recovery from the worst recession since the Great Depression. Hiring peaked 4.781 million in June.

The United States is in the midst of a fresh wave of COVID-19 infections. Nearly 200,000 new cases were reported on Wednesday and hospitalizations approached a record 100,000 patients, according to a Reuters tally of official data.

Republicans in Congress struck a more upbeat tone on Thursday during coronavirus aid talks as they pushed for a slim $500 billion measure that previously was rejected by Democrats who say more money is needed.

More than $3 trillion in government COVID-19 relief helped millions of unemployed Americans cover daily expenses and companies keep workers on payrolls, leading to record economic growth in the third quarter. The uncontrolled pandemic and lack of additional fiscal stimulus could result in the economy contracting in the first quarter of 2021.

“We are going to see another dip in employment sometime this winter and followed by a decline in GDP in the first quarter,” said Sung Won Sohn, a finance and economics professor at Loyola Marymount University in Los Angeles. “Unlike the first wave, there is no massive government stimulus on the horizon to cushion the economy. Interest rates are already zero.”

Job growth last month was likely held back by further departures of temporary workers hired for the 2020 Census. States and local governments are also expected to have shed more workers, leaving overall government payrolls to decline for a second straight month.

Retailers typically embark on seasonal hiring in November, a practice that has been upended by the pandemic. Economists expect this disruption could throw off the model that the government uses to strip seasonal fluctuations from the data.

Payrolls could surprise on the downside. The Institute for Supply Management reported this week its measure of factory employment contracted in November. The Federal Reserve’s “Beige Book” report showed employment rising in all districts on or before Nov. 20, but the U.S. central bank noted “for most, the pace was slow, at best.”

The unemployment rate is forecast dipping to 6.8% from 6.9% in October. It, however, has been biased down by people misclassifying themselves as being “employed but absent from work.” That will keep the focus on long-term unemployment and people working part-time for economic reasons.

Economists will also keep an eye on the share of women in the labor force. Industries that tend to employ women have been hard hit by the recession. Many women have also quit jobs to look after children as schools have moved to online learning.

The number of people out of work for more than six months surged by 1.2 million in October. There were 6.7 million part-time workers. The share of those permanently unemployed increased to 40.9% in October from 35.6% in the prior month.

“Long-term unemployment always rises in a downturn, but the increase in the share of long-term unemployed has been extraordinarily rapid in the pandemic recession,” said Dean Baker, senior economist at the Center for Economic and Policy Research in Washington. “This matters because people who have been unemployed for more than six months generally have a harder time being reemployed.”

Labor market slack is expected to have left wages barely rising in November. Average hourly earnings are forecast nudging up 0.1%, matching October’s gain. The average workweek is seen steady at 34.8 hours. Slower job and wage growth would lead to weakness in a proxy for take-home pay.

“The slowing in income along with the lack of another fiscal stimulus package will constrain household income and spending going forward,” said Kathy Bostjancic, chief U.S. financial economist at Oxford Economics in New York.