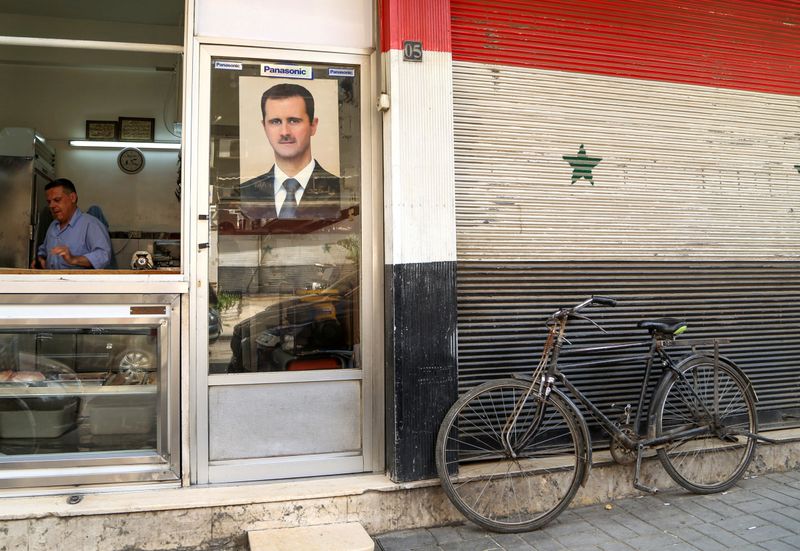 © Reuters. FILE PHOTO: A picture of Syrian President Bashar al-Assad is seen on a door of a butcher shop, during a lockdown to prevent the spread of the coronavirus disease (COVID-19), in Damascus

The United States imposed sanctions on 13 entities and six individuals, including the governor of the Central Bank of Syria, in a fresh round of sanctions aimed at cutting off revenue for Assad’s government.

“The United States will continue to employ all of its tools and authorities to target the finances of anyone who profits from or facilitates the Assad regime’s abuse of the Syrian people,” U.S. Treasury Secretary Steven Mnuchin said in a statement.

U.S. Secretary of State Mike Pompeo separately warned that the targeting of officials, commanders and “corrupt business leaders will not cease until the Assad regime and its enablers take irreversible steps to end their campaign of violence against the Syrian people and genuinely implement United Nations Security Council Resolution 2254.”

A crackdown by Assad on protesters in 2011 led to the civil war, with Iran and Russia backing the government and the United States supporting the opposition.

Millions of people have fled Syria and millions more have been internally displaced.

Washington also blacklisted on Wednesday the head of the Syrian General Intelligence Directorate, the Syrian Ministry of Tourism and a Syrian businessman, Khodr Taher Bin Ali, who the Treasury said was connected to the Assad government, as well as his network of businesses.

The Treasury authorized until Dec. 30 transactions and activities necessary for the winding down of business with Emma Tel LLC, which was founded by the businessman.

Wednesday’s action freezes any U.S. assets of those blacklisted and generally bars Americans from dealing with them.

The State Department, as part of Wednesday’s move, imposed sanctions on the commander of the 5th Corps of the Syrian Arab Army, accusing Milad  Jedid of being involved in preventing a ceasefire in the country, and also designated two other Syrians.

Syria has been under U.S. and European Union sanctions that have frozen the assets of the state and hundreds of companies and individuals. Washington already bans exports to Syria and investment there by Americans, as well as transactions involving oil and hydrocarbon products.