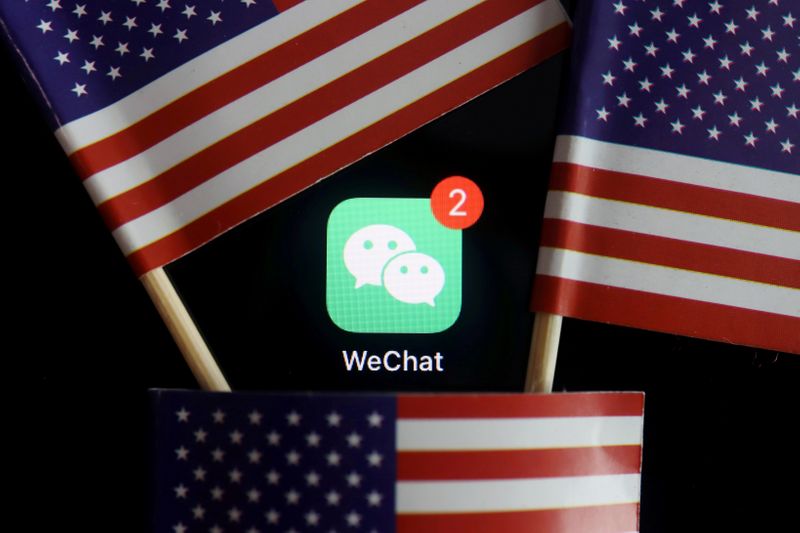 © Reuters. FILE PHOTO: The messenger app WeChat is seen among U.S. flags in this illustration picture

The government said it was appealing to the 9th U.S. Circuit Court of Appeals the Sept. 19 preliminary junction issued by U.S. Magistrate Judge Laurel Beeler. The injunction blocked the U.S. Commerce Department order, which would also bar other U.S. transactions with Tencent Holding’s (HK:) WeChat, potentially making the app unusable in the United States.

A U.S. spokesman for Tencent did not immediately comment.

The Justice Department said earlier that Beeler’s order was in error and “permits the continued, unfettered use of WeChat, a mobile application that the Executive Branch has determined constitutes a threat to the national security and foreign policy of the United States.”

Lawyers for the U.S. WeChat Users Alliance, the group behind the legal challenge to the WeChat ban, earlier questioned the urgency of the government’s request for Beeler to stay her ruling.

Beeler said WeChat users who filed a lawsuit “have shown serious questions going to the merits of the First Amendment claim.” The U.S. Constitution’s First Amendment guarantees freedom of speech.

WeChat has had an average of 19 million daily active users in the United States, analytics firms Apptopia said in early August. It is popular among Chinese students, Americans living in China and some Americans who have personal or business relationships in China.

WeChat is an all-in-one mobile app that combines services similar to Facebook (NASDAQ:), WhatsApp, Instagram and Venmo. The app is an essential part of daily life for many in China and boasts more than 1 billion users.

A U.S. judge in Washington on Sunday issued a similar preliminary injunction to halt the U.S. app store ban on new TikTok downloads.