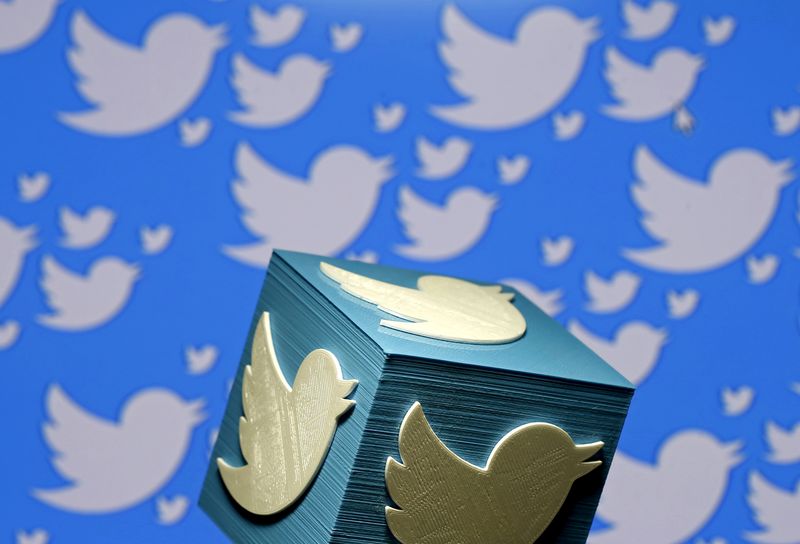 © Reuters. FILE PHOTO: A 3D-printed logo for Twitter is seen in this picture illustration made in Zenica

Republicans who had decried Twitter’s earlier actions posted the story freely on the site. “You can now share the bombshell story Big Tech didn’t want you to see,” Arizona Representative Paul Gosar tweeted on Friday morning.

Twitter acknowledged Friday it had stopped blocking links to early versions of the New York Post articles, saying the private information included in them had become widely available in the press and on other platforms.

The company’s policy chief Vijaya Gadde said Thursday night that Twitter had decided to make changes to its hacked materials policy following feedback, but a spokesman told Reuters that the New York Post story would still be blocked for “violating the rules on private personal information.”

“We will no longer remove hacked content unless it is directly shared by hackers or those acting in concert with them,” Gadde said in a series of tweets. “We will label Tweets to provide context instead of blocking links from being shared on Twitter.”

“Our goal is to attempt to add context, and now we have capabilities to do that,” he tweeted.

Tweets of the story successfully published on Friday did not have any labels attached. Twitter declined to answer Reuters questions on whether that was due to an error or a policy decision.

The company had briefly restricted the Twitter account of U.S. President Donald Trump’s re-election campaign after it posted a video that referred to the New York Post story on Thursday.

Separately, the Senate Commerce Committee confirmed Friday it will hold an Oct. 28 hearing with Dorsey and the chief executives of Facebook Inc (O:) and Google parent Alphabet Inc (O:) and will look at “how best to preserve the internet as a forum for open discourse.”

The companies previously confirmed the executives would remotely appear at the hearing.