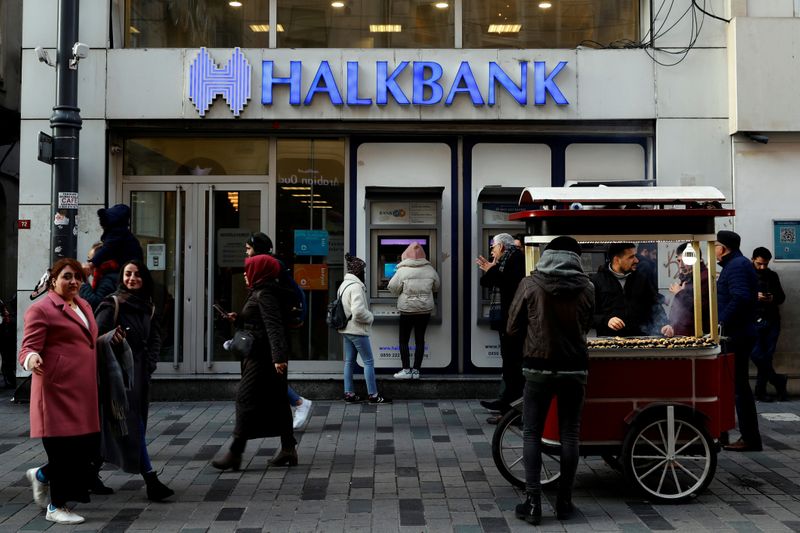 © Reuters. FILE PHOTO: People walk past by a branch of Halkbank in central Istanbul

U.S. District Judge Richard Berman in Manhattan rejected Halkbank’s claim that the Foreign Sovereign Immunities Act shielded it from prosecution, saying that law did not appear to grant immunity in criminal proceedings.

He also said an exception for commercial activity “would clearly apply and support the Halkbank prosecution,” citing the bank’s interactions with U.S. Treasury Department officials and its alleged laundering of more than $1 billion through the U.S. financial system.

U.S. prosecutors accused Halkbank of using money servicers and front companies in Iran, Turkey and the United Arab Emirates to evade sanctions, enabling oil and gas revenue to be spent on gold and facilitating sham food and medicine purchases.

They also accused Halkbank of helping Iran secretly transfer $20 billion of otherwise restricted funds, including the $1 billion through U.S. accounts.

Halkbank has separately asked the federal appeals court in Manhattan to replace Berman with a different judge because of his alleged bias, an accusation Berman has denied.

Berman has overseen several related cases, including the 2018 conviction of former Halkbank executive Mehmet Hakan Atilla and a guilty plea by Reza Zarrab, a wealthy Turkish-Iranian gold trader who testified against Atilla.

Bolton wrote that Turkish President Tayyip Erdogan in 2018 gave U.S. President Donald Trump a memo saying Halkbank was innocent, and Trump said the problem would be “fixed” once prosecutors were replaced.