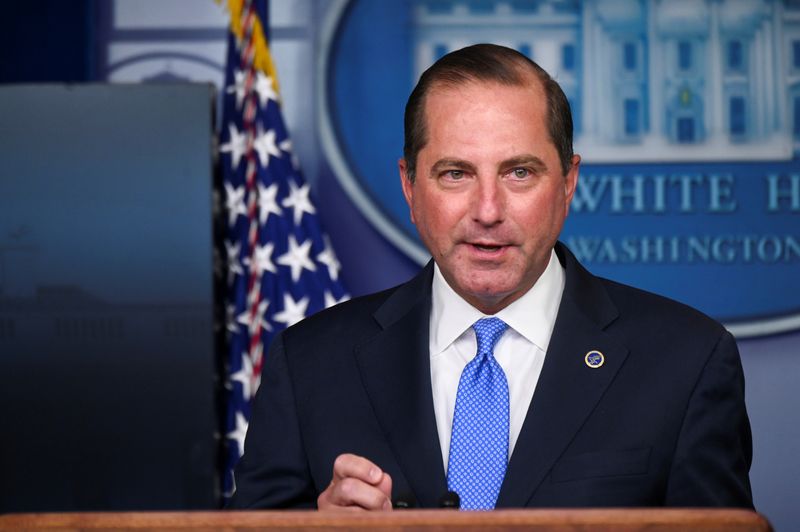 By Peter Szekely and Dan Whitcomb

NEW YORK (Reuters) – The Trump administration moved on Tuesday to accelerate vaccinations of Americans against COVID-19, releasing the rest of the doses it had been keeping in reserve and recommending states immediately open inoculations to those age 65 and over.

Health officials at the state and federal level have scrambled in recent days to step up vaccination programs that had given shots to only 9.3 million Americans, as coronavirus infections remain at record highs in many U.S. states 12 days into the new year.

Many U.S. states had strict rules in place giving shots to healthcare workers and nursing home residents first, telling so-called “non-essential workers” they might have to wait months for their turn.

“We’ve already distributed more vaccine than we have healthcare workers and people in nursing homes,” U.S. Health and Human Services Secretary Alex Azar told ABC News. “We’ve got to get to more channels of administration.”

Roughly 27.5 million doses have been distributed by the U.S. government to states so far, according to the U.S. Centers for Disease Control and Prevention.Azar said the administration, which had been keeping doses in reserve to make sure that all those who got a first inoculation receive their second shot on schedule, was now confident enough in the supply chain to release that stockpile.

The pace of vaccinations has risen to 700,000 per day nationwide and was expected hit 1 million per day within 10 days, officials said.

‘READY TO GET MORE SHOTS IN ARMS’

“Michigan and states across the country remain ready to get more shots in arms, which is why the Trump Administration’s decision to grant our request and release millions of doses of the vaccine is so crucial,” Michigan Governor Gretchen Whitmer said in a written statement.

Whitmer, who had backed the lower vaccination age, is seeking permission from the U.S. government to purchase 100,000 vaccine doses directly from manufacturer Pfizer Inc. (NYSE:)

The U.S. Food and Drug Administration has authorized the vaccine from Pfizer and partner BioNTech SE (NASDAQ:) and a second vaccine from Moderna (NASDAQ:) Inc for emergency use.

As of Monday night, the United States has reported a total of 22.5 million coronavirus infections and 376,188 deaths during the pandemic. Nearly 130,000 Americans were hospitalized with COVID-19 at midnight on Monday.

A Reuters tally has shown that the number of COVID-19 patients requiring hospitalization may have leveled off, at least temporarily, although public health officials warn that further spread may still be seen from holiday gatherings.

The latest surge has potentially been compounded by a more infectious variant of the virus first seen in the United Kingdom and now found in at least 10 U.S. states – California, Florida, New York, Colorado, Georgia, Indiana, Connecticut, Minnesota, Pennsylvania and Texas.

Not all U.S. governors welcomed the Azar’s direction to widen the group of Americans eligible for vaccines.

New York Governor Andrew Cuomo said he would grudgingly agree to include people as young as 65 and those with pre-existing conditions, even though he personally opposes it.

“The policy and the intelligence of the federal system eludes me,” Cuomo told a news briefing.

Cuomo said including people who are immuno-compromised, a poorly defined category that he said could include smokers and the obese, could lead to more than 7 million people vying for the 300,000 doses received by New York each week.

Public health experts have said no U.S. state has so far come close to using up its federal allotments of vaccines.