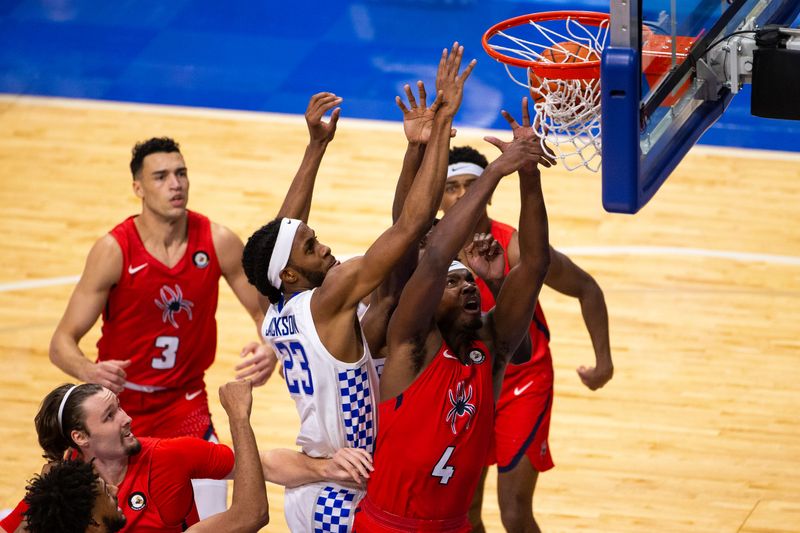 Nathan Cayo and Blake Francis each had 18 points and Richmond’s defense forced Kentucky into 21 turnovers and 0-for-10 shooting from 3-point range in a 76-64 victory Sunday over the 10th-ranked Wildcats in Lexington, Ky.

Grant Golden had 13 points and Tyler Burton finished with 11 for Richmond (2-0). The Spiders scored 22 points off Kentucky’s turnovers, which diminished the impact of the Wildcats (1-1) winning the rebound battle 54-31.

Brandon Boston Jr. had 20 points and 10 rebounds and Olivier Sarr finished with 17 points and 11 rebounds for Kentucky.

Preseason All-American Jared Butler scored 20 points, shooting 4 of 7 from beyond the 3-point arc, to lead a balanced attack as the Bears easily dispatched the Huskies at the Vegas Bubble in Las Vegas.

Washington (0-1) was led by RaeQuan Battle, who scored 10 points. Jamal Bey and Erik Stevenson, a transfer from Wichita State, each added eight points.

Christian Bishop’s 16 points led a balanced scoring attack as the Bluejays opened their season with a nonconference win over the visiting Bison at Omaha, Neb.

Big East Conference Preseason Player of the Year Marcus Zegarowski chipped in 12 points to go along with six assists for the Bluejays (1-0), while Antwann Jones and Mitch Ballock added 11 each. Creighton collected 18 assists on 27 made buckets and committed just four turnovers.

Rocky Kreuser scored 16 points for the Bison (0-3), who were playing for the second time in as many days after falling Saturday at Nebraska. North Dakota State and Creighton scheduled this game on three days’ notice.

The Cougars were oppressively good on defense, able to hold off the Red Raiders despite going the final 12:27 without a made field goal in Fort Worth, Texas.

Marcus Sasser led the Cougars (3-0) with 17 points and Quentin Grimes added 15. Houston, which built a 20-point second-half lead, was clutch at the free-throw line, hitting 16-of-21 — a vast difference from Texas Tech’s frustrating night at the stripe (13-of-24).

Texas Tech (2-1) also shot just 22.2 percent from the 3-point line. Mac McClung’s 16 points paced the Red Raiders, but his struggles typified his team’s: He was 0-for-6 from 3-point territory and 3-for-11 from the floor overall.

A 31-3 run in the first half and balanced scoring propelled the Sun Devils to a victory over the visiting Huskies in a nonconference game at Tempe, Ariz.

Houston Baptist (0-2) was paced by Ty Dalton’s 19 points. Darius Lee and Hunter Janacek each added 13 points. Za-Ontay Boothman, of Buckeye, Ariz., had 12 points for the Huskies.

The Buckeyes received a scare before holding off the visiting River Hawks in Youngstown, Ohio.

Jacob Young scored 17 points to lead a balanced attack as the Scarlet Knights never trailed in a methodical win over the visiting Pride in Piscataway, N.J.

Jalen Ray scored 22 points for Hofstra, which played its season opener. Isaac Kante pulled down a career-high 17 rebounds and Kvonn Cramer scored eight points in his collegiate debut for the Pride, which won the Colonial Athletic Association tournament last season and is favored to win the league this year.

Isaiah Livers had 22 points and freshman Hunter Dickinson scored all 19 of his points after halftime as the Wolverines survived to beat in-state opponent Oakland University in overtime in Ann Arbor, Mich.

Livers went 5-for-7 from long range while his teammates shot 3-for-20 on their 3-point tries. Franz Wagner had 13 rebounds and six points for the Wolverines (2-0).

Jalen Moore led the Golden Grizzlies with 21 points, nine rebounds and six assists. Trey Townsend added 13 points for Oakland (0-4), which was playing for the fourth time in five days.