The Margin: Twitter has permanently banned the corporate MyPillow account after founder Mike Lindell posted from it 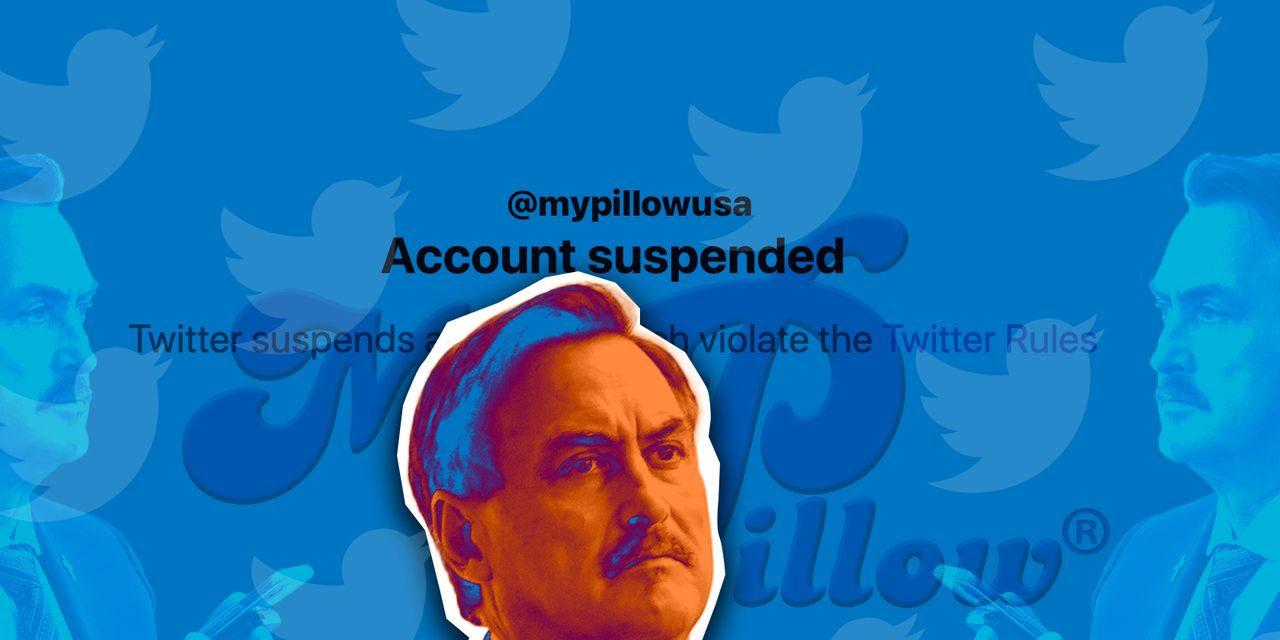 The social-media platform suspended Mike Lindell’s personal account last week, after the MyPillow CEO continued to spread baseless claims that Donald Trump won the 2020 U.S. presidential election, which he lost to President Joe Biden by more than 7 million votes, 4½ percentage points and 74 votes in the Electoral College. Now, the corporate MyPillow account has also been permanently banned after Lindell tweeted from it to circumvent his personal ban — and to call out Twitter
TWTR,

CEO Jack Dorsey for “canceling” him.

“Thank you to everyone who has supported MyPillow during this time…..Jack Dorsey is trying to cancel me (Mike Lindell) out!” the company tweeted Sunday. Some Twitter users captured screenshots of the tweets before the account was shut down.

“We are extremely busy and hiring as fast as we can to handle all the shipping!” the post continued. “Jack will be found out and should be put in prison when all is revealed!”

Twitter has banned more than 70,000 accounts for sharing misinformation since the riot at the U.S. Capitol last month — including the account of former President Donald Trump, who has been accused of inciting the mob to storm the federal building.

MyPillow was not immediately available for comment, but Lindell reportedly told USA Today that he “can’t believe they’re doing this to my company. They’re out to destroy me.”

Conservative media outlet Newsmax TV asked Lindell about the latest Twitter suspension on the air on Tuesday. Lindell instead started reciting unfounded election-fraud conspiracy theories, leading anchor Bob Sellers to read a statement noting that Newsmax has not been able to verify allegations about the voting machines. The channel had first read such a statement on the air a month and a half ago, after voting-technology companies Smartmatic and Dominion Voting Systems threatened legal action against a number of right-wing media outlets for airing false claims.

When Lindell continued to repeat his voting-fraud claims, Sellers got up and walked off the set.

and J.C. Penney have discontinued selling MyPillow in their stores, USA Today reported, although the brands have blamed a slowdown in sales for no longer stocking Lindell’s bedding on shelves. Lindell also claimed that Wayfair
W,

and Texas supermarket chain H-E-B are no longer carrying his products.

Brands were generally not immediately available for comment. A spokesperson for J.C. Penney told MarketWatch via email that the company discontinued selling MyPillow products last summer “due to decreased customer demand.” Remaining store inventory will be marked down until it is sold out, and it will not be restocked, the spokesperson said.

That’s not Lindell’s only headache at the moment. Dominion is mulling litigation against him for claiming that its voting machines were part of the alleged perpetration of election fraud that took the presidency away from Trump. The maker of voting machines and software also filed a $1.3 billion defamation lawsuit against Trump personal lawyer Rudy Giuliani for implicating the voting machines in the baseless vote-tampering claims he has peddled.