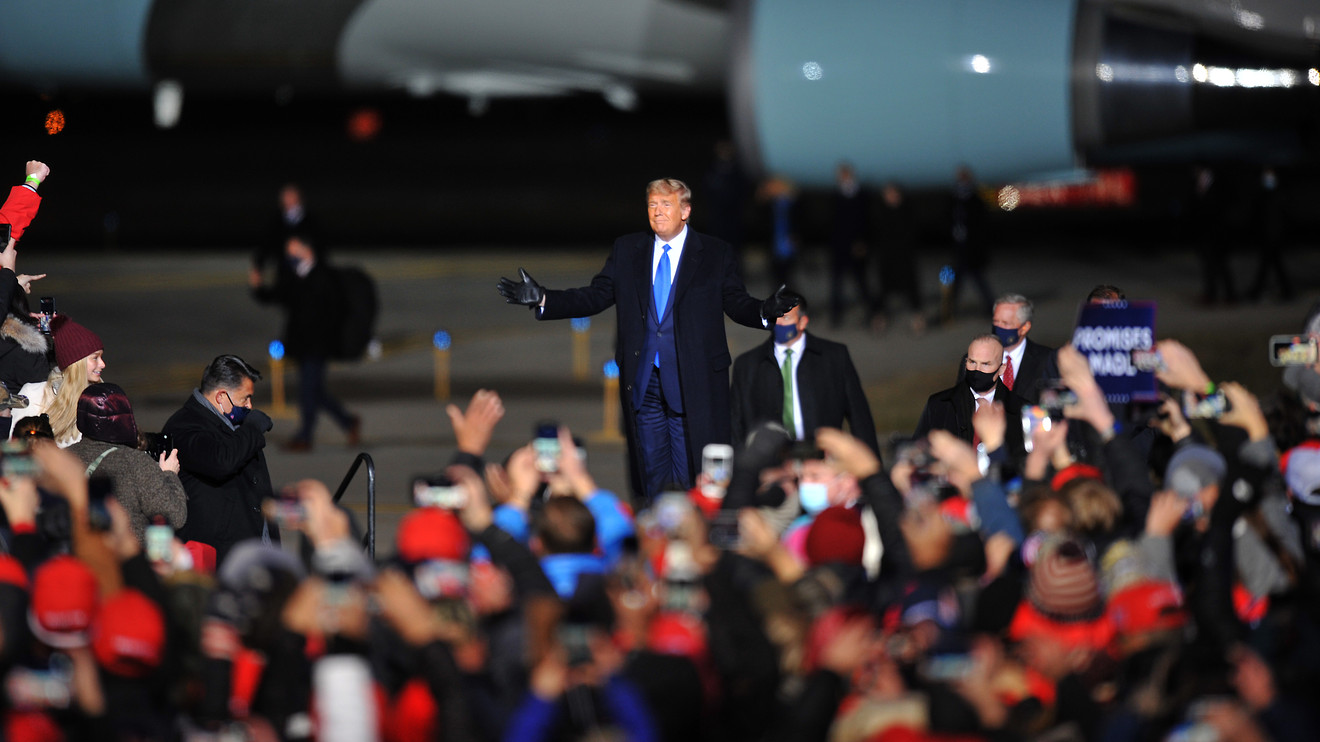 Thousands of people showed up to President Trump’s campaign rally at Omaha, Nebraska’s Eppley Airfield on Tuesday night. But once the commander-in-chief left in Air Force One around 9 p.m. CST, hundreds of his supporters that had been shuttled in for the event were now left stranded in near-freezing temperatures almost four miles from their cars.

The crowds weren’t fully cleared until after midnight, three hours later. And during that time, photos and videos of people lined up in the cold lit up Twitter, drawing comparisons to another epic event fail: 2017’s Fyre Festival.

Fyre Fest was the Bahamian retreat backed by Ja Rule and billed as a luxury Coachella in the Caribbean — but it became a media firestorm in late April 2017 after hundreds of ticket holders expecting a luxury experience on a private island arrived to find sodden FEMA tents on a construction site that was serving what looked like a Kraft single slapped on two pieces of white toast. Many were left stranded after charter flights to and from the island were canceled.

In Omaha, reporters estimated that a crowd of more than 6,000 people had packed into the risers outside the airport for the Tuesday night rally; organizers put the figure at 29,000. Local police warned just after 7 p.m. that the parking lots were full, and shuttles had stopped ferrying people to the event. Hundreds of people were late to get inside, according to liberal news site the Iowa Starting Line.

And they were late to get out, too. Once the president exited, lines of people waited for shuttles back to the parking lot as temperatures dipped into the low 30s.

Reporters on the ground in Nebraska from CNN and the Omaha World-Herald reported that at least seven people were taken to the hospital, although the Omaha Scanner, a Twitter account that monitors local emergency scanner traffic, said that officials would have an exact count on Wednesday. The Omaha Police Department confirmed to MarketWatch that seven people were transported to area hospitals, and there were 30 individuals contacted by medics during the duration of the entire rally, not just the end of it.

The World-Herald observed two people receiving help from Omaha police, including an elderly woman who was warming up in the back of a police cruiser, and a boy who was given a blanket.

CNN correspondent Jeff Zeleny described the situation as a “chaotic cluster,” and quoted one Omaha officer saying “we need at least 30 more buses.”

Some people began to walk from the Eppley Airfield site to the nearest parking lots to reach their cars; the closest was 2.5 miles, with some 3.7 miles away. The Omaha Police Department told MarketWatch that many people underestimated the distance from the event back to the parking lot on foot, and officers assisted the elderly and infirm who attempted to make the trek.

“Officers picking up people wandering in the cold unable to locate their vehicles and are taking them to various parking lots,” the Omaha Scanner tweeted. The account also shared reports of individuals receiving medical attention from police, such as “an elderly party who is frozen cold unable to move with an altered mental status” and “4 patients treated for cold exposure.”

Trump officials initially told World-Herald reporter Aaron Sanderford that they had plenty of buses to get people out; the problem was that traffic flow was throttled because the small, two-lane airport access road was limited to one direction. What’s more, Omaha police officials told MarketWatch that the crowds of people walking back to the parking lots also slowed down bus traffic, and further delayed bus trips “considerably.”

Samantha Zager, the Trump campaign’s deputy national press secretary, told MarketWatch that the rally organizers had deployed 40 shuttle buses instead of the normal 15 for the event, but local road closures and the resulting congestion caused the delays. She also said that there were tens, heaters, generators, hot cocoa and handwarmers available for guests at the departure location. “We always strive to provide the best guest experience at our events and we care about their safety,” she said. “President Trump loves his supporters and was thrilled to visit Omaha last night. Despite the cold, tens of thousands of people showed up for his rally.”

The last person was loaded into a bus from the rally site at about 11:50 p.m., Omaha police told MarketWatch, and vehicle and pedestrian traffic returned to normal by around 12:30 a.m. Wednesday. Officers continued helping attendees find their cars for some time afterward, as well.

The images of the stranded Trump supporters went viral on Twitter
TWTR,

overnight, leading to the hashtag #omahastranded trending into Wednesday morning. Many critics called it “Trump’s Fyre Fest,” with one user riffing on the president’s “Apprentice” catchphrase by asking, “Can we officially call this rally the ‘You’re Fyred Fest.’ Like, failing to plan for basic logistics was one of the major issues of Fyre Fest.”

Democratic Nebraska Sen. Megan Hunt tweeted that Trump “truly does not care” about his base. “Supporters of the President were brought in, but buses weren’t able to get back to transport people out. It’s freezing and snowy in Omaha tonight,” she wrote. “He truly does not care about you.”

Apart from potential hypothermia, critics also called the rally a “superspreader event” for the coronavirus, especially after looking at the pictures of thousands of attendees crowded together, with many not wearing face masks. A recent USA Today analysis reports that five counties that held Trump rallies saw COVID-19 cases surge afterward.

But at least one Trump supporter, who volunteered at the rally, disagreed with the criticism. Kris Beckenbach of Lincoln, Neb., told the World-Herald that while everyone was “tired and cold” while waiting to leave Tuesday’s rally, she didn’t blame the organizers. “How do you practice for that?” she asked, referring to the thousands of people that showed up.

What’s more, she said that she would do it all over again. “I would go up early and stand there all those hours. It was an adventure. It was absolutely an adventure.”