: The latest question in the debate over student debt forgiveness: How valuable is it? Researchers are split 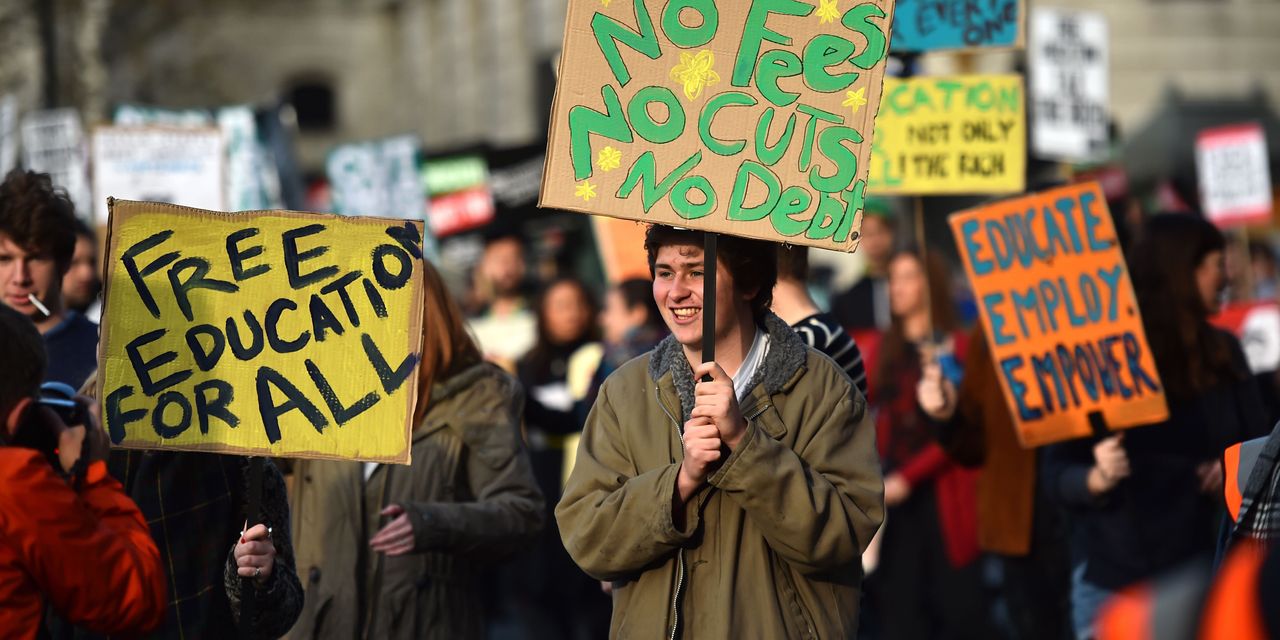 Since Joe Biden was elected president last month, the debate around whether the government should cancel student debt has become more urgent as the possibility that a proposal once considered radical becomes more realistic.

A working paper circulated by the National Bureau of Economic Research this month has injected fresh fuel into the debate among advocates, academics, policymakers (and Twitter users). It argued that cancelling student debt would provide a boon to high-income borrowers, while tweaking our current student loan system would provide more of an outsized benefit to low- and moderate-income borrowers.

The authors, Constantine Yannelis, an assistant professor of finance at the University of Chicago’s Booth School of Business and Sylvain Catherine, an assistant professor of finance at the Wharton School of the University of Pennsylvania, found that households earning in the top 30% of the earnings distribution would get almost half of the total forgiveness, while the bottom half of households would receive about one-quarter.

That notion isn’t particularly new. Borrowers with high student loan balances also often (but not always) have relatively high incomes because the six-figure debt is a sign that they went to graduate school and received a degree that will provide them with a premium in the labor market.

That dynamic means that any universal loan forgiveness plan, and even ones with caps on the amount of debt discharged, would likely provide the largest dollar benefit to relatively high earners.

It’s also why, even among those who believe the government should cancel some student debt, there’s debate about whether that forgiveness should be universal or phase out according to a borrower’s income level.

Where the analysis by the University of Chicago and Wharton researchers goes one step further is to argue that tweaking income-driven repayment, the program that allows borrowers to make smaller monthly payments if they make lower incomes, would actually be more progressive than canceling debt outright.

Under IDR plans, borrowers pay back their loans for 20 or 25 years and whatever they don’t pay off is discharged, though they have to pay taxes on that forgiveness. Right now, enrollment in these programs is spotty, but the researchers found that if the government were to sign up everyone who would benefit from an IDR plan, borrowers in the bottom half of the earnings ladder would get three-fifths of the dollars forgiven and borrowers in the top 30% would receive one-fifth of the dollars.

The paper also looks at a number other than outright student loan balances to measure the benefit of forgiveness. “Once we compute present value, student loan forgiveness is an even more regressive policy than if we simply looked at balances,” Yannelis said.

Present value is a concept that underlies many calculations made in finance, including how much a company should pay to acquire a rival firm and whether a stock is overpriced. It attempts to quantify the value of a benefit you receive in the future in today’s dollars and it’s based on the idea that a dollar you have today is worth more than a dollar you would get in the future.

Under that premise, Yannelis and Catherine argue, forgiveness today is worth less to a borrower who can’t afford to make standard monthly payments and is using income-driven repayment than to one who has enough money to pay down their debt quickly.

In other words, for a borrower on schedule to repay their loan in five years, getting forgiveness today is probably worth close to their loan balance because without forgiveness they’re putting a significant amount of money towards their debt in the near future.

“
“Say that to someone’s face — that you would rather have debt forgiveness in 20 years than $5,000 of debt cancellation right now.”
”


— Louise Seamster, an assistant professor at the University of Iowa

But to a borrower who is making small, or $0 payments based on their income that stretch out the loan for decades, forgiveness today is worth less. That’s because this borrower is putting very little money towards their loan today and instead is repaying their debt over the course of 20 to 25 years. Those future payments — which would be eliminated with a debt cancellation policy — aren’t worth much in today’s dollars.

But the idea of present value is based on some assumptions that mean it makes sense to use it when trying to value a company or account for a government’s pension liability, but gets trickier when trying to gauge the relative value of a benefit to an individual.

One of the most salient points in this case: that the dollar you get today is worth more than a dollar you receive in the future because you could invest the money you receive now and let it grow.

“Say that to someone’s face — that you would rather have debt forgiveness in 20 years than $5,000 of debt cancellation right now,” said Louise Seamster, an assistant professor at the University of Iowa, who has studied the disproportionate impact of student debt on Black borrowers and the role student debt cancellation could play in improving racial equity.

For a financially strapped borrower, receiving the money now can significantly influence their choices, regardless of how its value grows over time. For a relatively well-off borrower with more liquidity, that financial boon may actually be less impactful, even if it has a larger dollar value.

Indeed, other research indicates that to relatively low-income borrowers, immediate debt cancellation is worth a lot. An NBER working paper released last year found that after 10,000 student loan borrowers had their private debt cancelled through a legal proceeding they were more likely than similar borrowers to move, change jobs or return to school. They also saw their incomes increase by $4,000 over a three-year period on average.

“Those people were very constrained,” said Marco Di Maggio, an associate professor of business administration at Harvard Business School and one of the authors of the paper. For them, getting rid of the loan payment every month, “actually makes a difference, it makes a difference between paying your rent or not,” he said.

“We had an actual forgiveness experiment and measured what happened afterwards,” Di Maggio said. “Here it’s a thought exercise,” he said, referring to the new working paper.

In some scenarios, immediate debt cancellation wouldn’t have an impact on monthly payments. For example, borrowers who are paying $0 a month on an income-driven repayment plan, but owe $50,000 in student loans would still pay $0 a month if anything less than $50,000 was cancelled because under these plans, payments adjust with income, not student loan balance.

Still, a higher student loan balance or debt-to-income ratio can have consequences for student loan borrowers, including affecting their ability to get financing for other things, like a car or home, Seamster noted. That means that even for a borrower who pays $0 per month, cancellation could be beneficial both in their ability to make financial decisions today and how they psychologically think about their financial future.

Because borrowers in IDR programs make such small payments, they’re often barely able to make a dent in their loan. The result is a continuing ballooning of their balance — a situation debt forgiveness could mitigate even if it doesn’t cover the whole of their loan. Over 50% of borrowers with student debt in 2009 hadn’t repaid their loan 10 years later or in the standard repayment term, according to an analysis by Marshall Steinbaum, an assistant professor of economics at the University of Utah.

More than 25% of borrowers owed more 10 years later than they did in 2009, the analysis, published by the Jain Family Institute, found.

And though some of these borrowers could theoretically have their loans forgiven in 20 years under an income-driven repayment plan, there’s little evidence to indicate the program will work out as intended, Seamster said. The Public Service Loan Forgiveness program, which allows public servants to have their federal student loans forgiven after 10 years of payments, has been plagued with challenges — an experience that doesn’t bode well for borrowers hoping for cancellation under IDR.

“Without dealing with those logistical details, none of this is meaningful,” Seamster said of the new analysis of potential forgiveness under IDR.