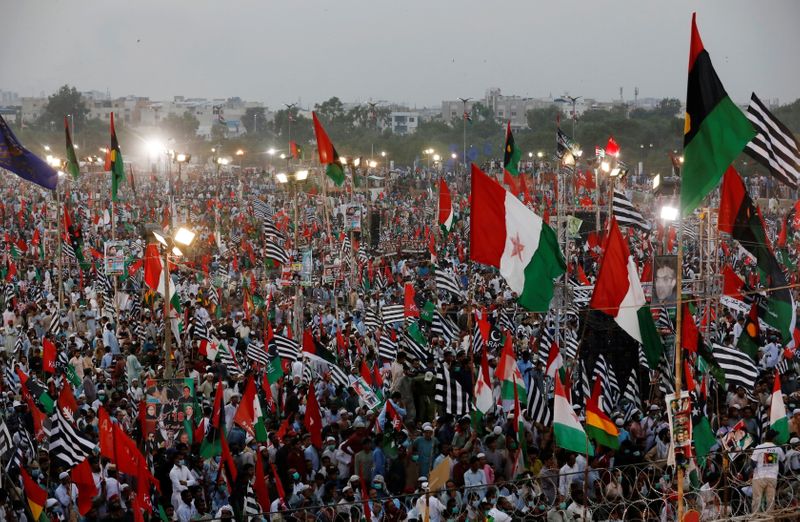 KARACHI, Pakistan (Reuters) – Tens of thousands of opposition supporters rallied on Sunday in the city of Karachi as part of a campaign to oust Pakistan’s Prime Minister Imran Khan, who they accuse of being installed by the military in a rigged 2018 election.

“You’ve snatched jobs from people. You have snatched two-time a day food from the people,” said opposition leader Maryam Nawaz about Khan while addressing the rally, which drew growing crowds in the second such gathering in three days.

She is the daughter and political heir of the former three-time premier Nawaz Sharif.

“Our farmers have hunger in their homes… our youth is disappointed,” said another opposition leader, Bilawal Bhutto Zardari.

The protests come as the country’s economy – which had already tanked before the global pandemic – struggles with double digit inflation and negative growth, which Khan’s opponents blame on his government.

“Inflation has broken the back of poor citizens forcing many to beg to feed their children,” said Faqeer Baloch, 63, at the Karachi rally.

“It is high time that this government should go now,” he said as the crowd chanted, “Go Imran go!”

The next general election is scheduled for 2023.

The rally in Karachi followed a protest by the alliance in eastern Gujranwala city on Friday, which was the biggest demonstration against Khan since he took office.

Speaking via video link from London to the Gujranwala gathering, Sharif accused army chief General Qamar Javed Bajwa of rigging the 2018 elections and orchestrating his ouster in 2017 in what he said were trumped up charges aided by judiciary.

Maryam said her party was not anti-military, but, “If you say that we will respect those who would crush the ballots under their boots, that’s not going to happen.”

The military, which denies meddling in politics or electoral wrongdoing, has yet to respond specifically to Sharif’s accusations.

Khan, who came to power on an anti-graft platform and denies the army helped him win, has defended the military.

(Writing and additional reporting by Asif Shahzad in Islamabad; Editing by Frances Kerry and Daniel Wallis)