Tens of thousands rally in Minsk, police use water cannon 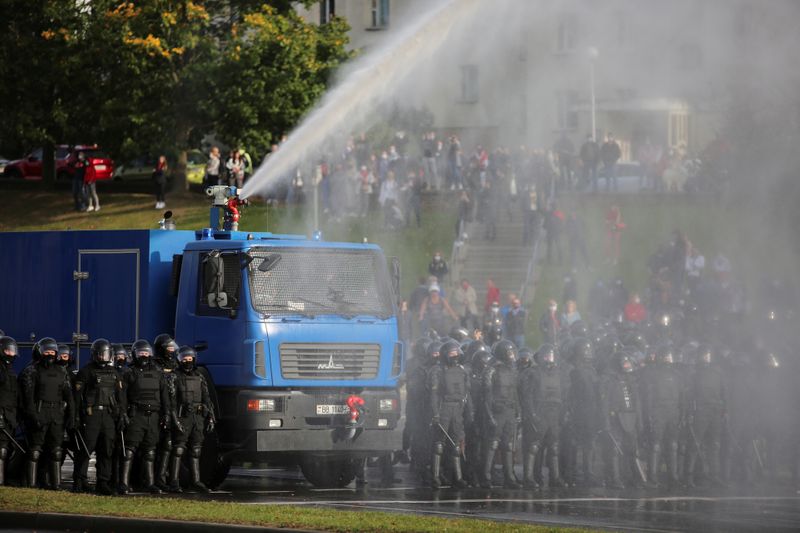 MOSCOW (Reuters) – Tens of thousands of people marched through the centre of the Belarusian capital Minsk on Sunday to demand that authorities free political prisoners, prompting police to turn water cannon on them.

The march is the latest in a series of rallies in Belarus since an Aug. 9 election in which President Alexander Lukashenko claimed a landslide victory. His opponents say it was rigged to hand him a sixth term in power.

The crowd, waving white flags with a red stripe, which have become the symbol of the Belarusian opposition, marched to the beat of drums towards detention centres, pictures and videos posted on social media showed.

“Let them out,” the crowd chanted by the walls of Okrestina detention centre, where some protesters and Lukashenko’s opponents are believed to be held.

Lukashenko is struggling to contain nearly two months of street protests that pose the biggest challenge to his 26-year rule. More than 13,000 people have been arrested and some later freed, while major opposition figures have been jailed or exiled.

Armed policemen in black helmets holding batons cordoned off streets in central Minsk, while some metro stations temporarily closed their doors for commuters.

The authorities temporarily ordered slower internet speed, which was restored late on Sunday. Telegram channels, the main means of communication and distribution of photos and videos from the protests, asked residents of Minsk to unlock their Wifi networks if protesters march nearby.

Other cities in Belarus also saw rallies against Lukashenko on Sunday.

The political crisis in Belarus has caused broad repercussions for Minsk and its ally Moscow. The European Union and the United States has imposed sanctions on senior Belarusian officials, but spared Lukashenko.

The crisis has also raised the possibility of more sanctions against Moscow if it helps Lukashenko. The rouble has already dropped steeply at the prospect.

Lukashenko denies electoral fraud and was inaugurated in late September in a ceremony held without any prior announcement, bringing more protests and condemnation from the European Union, the United States and Britain.