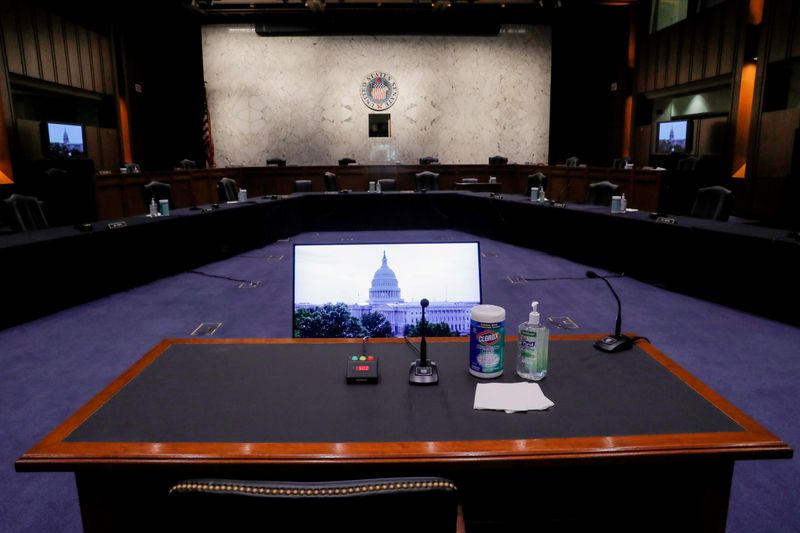 WASHINGTON (Reuters) – U.S. Supreme Court nominee Amy Coney Barrett will tell senators in her high-stakes confirmation hearing this week that she will approach cases based on the law, not her personal views, as Democrats urged her to step aside on an upcoming challenge to the Obamacare law and any potential election-related disputes.

A four-day Senate Judiciary Committee confirmation hearing for the conservative appellate court judge is set to begin on Monday, a key step before a final full Senate vote by the end of October on her nomination for a lifetime job on the court.

In a copy of her prepared remarks released on Sunday, Barrett said that as a judge she seeks to “reach the result required by the law, whatever my own preferences might be.”

Barrett, 48, said in the statement that it will be an “honor of a lifetime” to serve alongside the current eight justices and explained how she approaches cases.

“When I write an opinion resolving a case, I read every word from the perspective of the losing party. I ask myself how would I view the decision if one of my children was the party I was ruling against,” she wrote.

Barrett’s confirmation to replace the late liberal Justice Ruth Bader Ginsburg would create a 6-3 conservative majority on the court that could lead to rulings rolling back abortion rights, expanding religious and gun rights, and upholding Republican-backed voting restrictions, among other issues.

Democratic opposition to Barrett on policy issues has focused on her possible role in deciding a case before the Supreme Court in which Trump and Republican-led states are seeking to invalidate the Affordable Care Act (ACA) healthcare law, often called Obamacare.

Senate Democratic leader Chuck Schumer said on Sunday that Barrett should, if confirmed, step aside from the case, which is scheduled to be argued at the court on Nov. 10.

“She doesn’t come unbiased and that’s why she should recuse herself,” he said.

A key Obamacare provision that would be thrown out if the court strikes down the law bars insurance companies from denying coverage to people with pre-existing conditions. Democrats have criticized Trump for seeking to end Obamacare protections amid a pandemic that has killed more than 210,000 Americans.

Schumer also said Barrett should recuse herself from any cases involving the presidential election because of statements made by Trump in which the president has said the court is likely to have election cases. Trump, who is running for reelection against Democrat Joe Biden, has indicated he would expect the court to rule in his favor if Barrett is confirmed.

Under existing rules, individual justices have the final say on whether they should recuse.

The Senate’s Republican leaders rejected Democratic pleas to delay the hearing after two Republican Judiciary Committee members and Trump himself tested positive for the coronavirus in the days following his Sept. 26 White House ceremony announcing Barrett, 48, as his nominee.

Barrett is scheduled to deliver her opening statement to the committee on Monday, with senators also making opening remarks.

She is set to face questions from senators on Tuesday and Wednesday, starting with Committee Chairman Lindsey Graham (NYSE:), for what promises to be grueling all-day sessions. The hearing is due to conclude on Thursday with outside witnesses testifying about her qualifications.

With Republicans holding a 53-47 Senate majority, Barrett’s confirmation seems assured. Democrats are still fuming that McConnell is hurrying to confirm Barrett as the election approaches, after blocking consideration of Democratic President Barack Obama’s nominee to fill a 2016 Supreme Court vacancy during an election year.

Graham has said his committee will likely vote on the nomination on Oct. 22, setting up a vote on the Senate floor by the end of the month.

“We can easily get her confirmed before the election,” he said on Sunday in an appearance on Fox News show “Sunday Morning Futures.”

Barrett also is expected to face Democratic questioning on abortion. In 2006, while teaching law at the University of Notre Dame, Barrett, a devout Catholic, added her name to an advertisement opposing “abortion on demand” that appeared in a local newspaper in Indiana and also signed a similar statement in 2013, she disclosed on Friday.

During her 2017 confirmation hearing to her current judgeship, Barrett said her religious faith would not affect her decisions on the bench.

Republicans have said questions about Barrett’s religious faith should be off-limits and so far Democrats have indicated they will not focus on it. Democratic Senator Mazie Hirono said in an interview on CNN’s “State of the Union” on Sunday that Barrett’s religious views were “irrelevant.”