Supporters of hardline Indonesian cleric clash with police in Jakarta 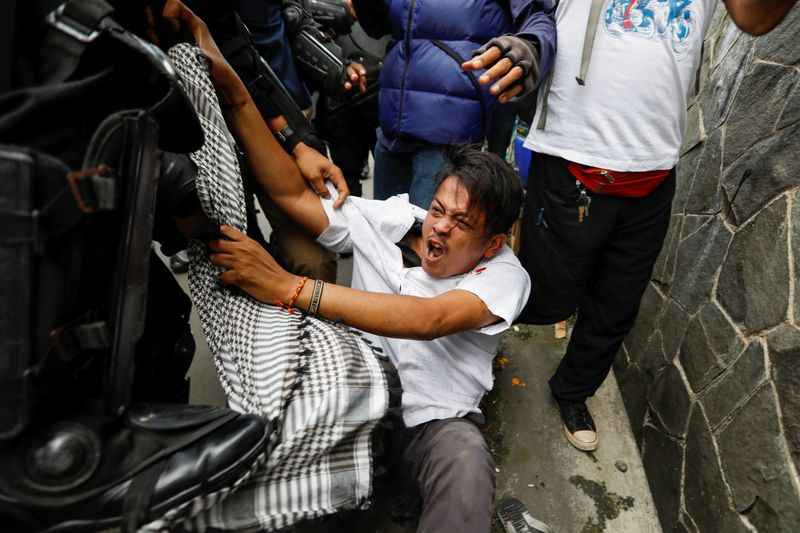 © Reuters. Indonesian Muslim group protest over the detention of Rizieq Shihab in Jakarta

JAKARTA (Reuters) – Supporters of firebrand Indonesian cleric Rizieq Shihab clashed with police during a demonstration in Jakarta on Friday, after demanding their spiritual figurehead be released from police detention.

Several hundred protesters, some dressed in white Islamic garb, had gathered in the capital of the world’s largest Muslim-majority nation, with scuffles breaking out after police told the group large gatherings were prohibited amid the pandemic.

“For the safety of our souls…the police and the military will disperse (protesters) and act decisively,” a police officer told protesters, blasting the message through a sound system.

Indonesia is grappling with the worst coronavirus outbreak in Southeast Asia, averaging more than 6,000 new cases per day this week.

Police deployed thousands on the streets of Jakarta on Friday to guard the protest, with a new requirement for people to present a negative rapid COVID-19 test to enter the capital likely thwarting some supporters from joining the rally.

Rizieq, the controversial leader of the Islamic Defenders’ Front (FPI) was arrested last weekend for allegedly violating coronavirus protocols after his recent return to Indonesia following three years in self-exile was marked with events attended by thousands.

The calls for his release also come after six of the cleric’s bodyguards were shot dead following a clash with police on a highway.

The FPI, once notorious for raiding bars and brothels, has become more politically influential in recent years, particularly after helping orchestrate mass rallies against Jakarta’s former Christian governor in 2016 that were the largest in decades.