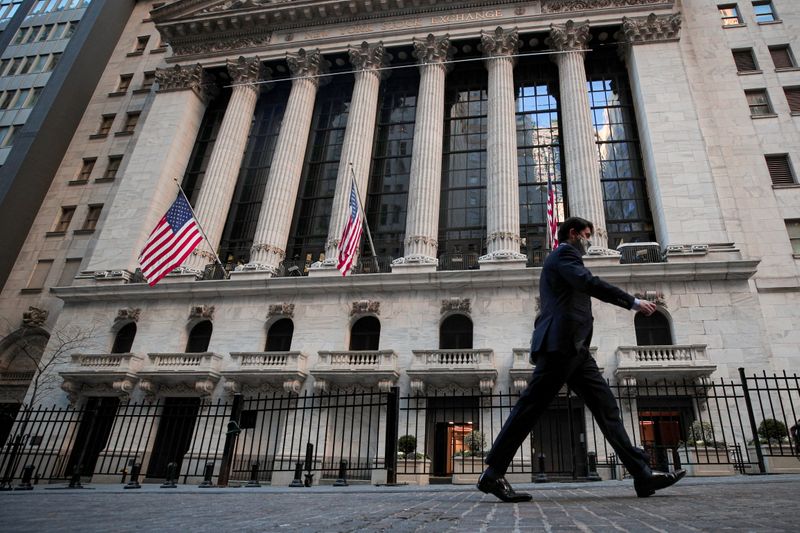 © Reuters. A man walks outside the NYSE in New York

NEW YORK (Reuters) – U.S. stock markets are poised to rally in 2021, bolstered by the predictability of a new U.S. president, fresh stimulus and infrastructure spending, plus a coronavirus vaccine. But there is a potential wild card: outgoing President Donald Trump, the head of asset allocation at Pacific Life Fund Advisors said on Monday.

“Overall we are bullish on 2021,” said Max Gokhman, who oversees $32 billion in assets. “But exactly how bullish depends on a number of factors,” he told the Reuters Global Investment Outlook Summit.

One factor is just how voluble Trump, who has long used Twitter as his megaphone, will be in the weeks before Biden’s Jan. 20 inauguration, as well as beyond, Gokhman said.

“One of the key risks of 2021 remains Donald Trump,” said Gokhman. “Trump won’t go away or be quiet. He could skew us to lower growth and lower equity returns.”

Pacific Life Fund Advisors cut its exposure to large-cap tech companies in favor of small-cap value in September, for example, and is now more neutrally positioned to get through the next weeks.

U.S. stocks rallied during Trump’s presidency, up more than 60% from his 2016 election to the Nov. 3 Election Day. Stocks have continued to rally since then.

Still, Gokhman noted some unpredictable actions by Trump since losing the election, such as firing the Pentagon chief, while his Treasury secretary said he will end programs designed to help markets and businesses survive the pandemic. Trump is also moving to sell drilling rights in Alaska’s Arctic National Wildlife Refuge.

Few investors are talking about it publicly, since the is up 12% this year, having rebounded 60% from March lows. But Gokhman said he worries about executive orders Trump could push through before he goes and how disruptive he could be in influencing fellow Republicans, considering he still commands a sizeable base of the electorate.

Both could complicate stimulus spending and infrastructure investments that markets are betting Biden favors and could prompt bigger gains for cyclical stocks down the road, Gokhman said.

Among the first indications for how strong next year’s gains may be will be how Georgia voters decide U.S. Senate run-off elections on Jan. 5. “For a value rotation to really take off, we would need Georgia to go blue,” Gokhman said.

Even energy companies like Chevron (NYSE:) and Exxon (NYSE:), whose stock prices have been battered this year, could see an uptick in demand as people begin driving more once the virus is more under control. In addition, equipment from Caterpillar (NYSE:) and United Rentals (NYSE:), which would benefit from infrastructure spending, also run on oil products, suggesting a positive knock-on effect for energy companies, Gokhman said.

“If infrastructure, stimulus and vaccine deployment go well then you could have an absolutely incredible market” next year, he said.