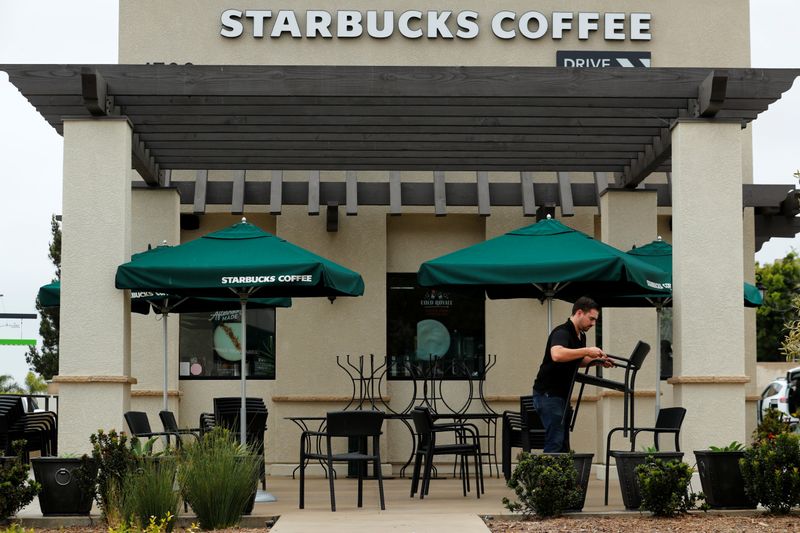 © Reuters. FILE PHOTO: A worker puts away patio furniture at a Starbucks Corp drive-through location closes down this afternoon for anti-bias training as the coffee chain closed all 8,000 of their company-owned cafes in the U.S. including this location in Oceanside,

(Reuters) -Coffee chain Starbucks Corp (NASDAQ:) on Wednesday named Vice Chair Mellody Hobson as head of its board, making her the only African American woman to chair a Fortune 500 company.

She takes over as non-executive chair from Myron Ullman, who is retiring in March.

Hobson, co-chief executive officer of asset manager Ariel Investments LLC, was named vice chair in 2018 and has served on Starbucks’ board for over 15 years.

The appointment comes at a time when Corporate America is pushing for improving diversity in its senior leadership ranks. Citigroup Inc (NYSE:) earlier this year appointed Jane Fraser as its chief executive officer, making her the first woman to lead a Wall Street bank.

Women have been underrepresented in top roles at big U.S. companies, and the share of board seats held by them and minorities has drawn scrutiny in recent years.

Earlier this year, Starbucks said it was targeting 30% representation of Black, Indigenous and People of Color (BIPOC) at all corporate levels by 2025. It also said in a recent report that its U.S. partner base comprised 69% women and 47% BIPOC.

Starbucks currently has five women on its 13-member board, including Roz Brewer, the company’s chief operating officer.

The coffee chain is also hosting its biennial investor day later in the day.