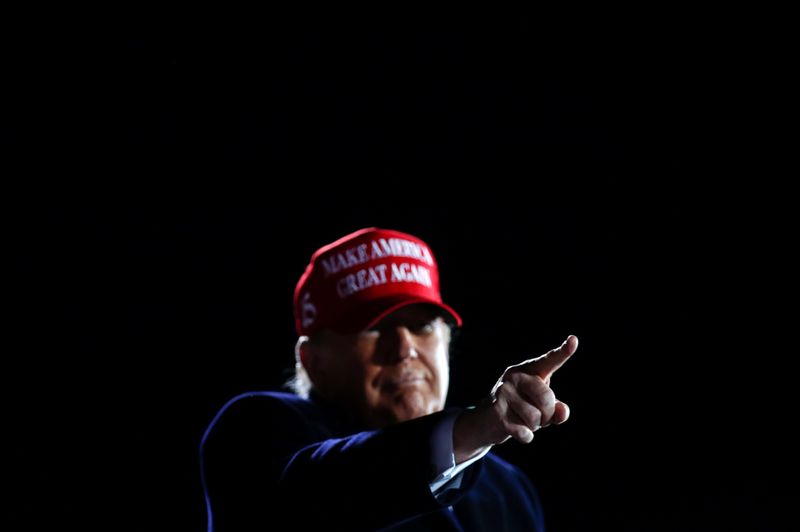 (Reuters) – President Donald Trump and Democratic challenger Joe Biden will hold dueling prime-time town halls on Thursday instead of their second presidential debate, which was canceled after Trump declined to take part in a virtual matchup.

The twin events, in which each candidate will field questions from voters, will both take place at 8 p.m. EDT (0000 GMT), with Trump on NBC and Biden on ABC.

Trump pulled out of the debate when the commission in charge of organizing the event said it would be held virtually due to concerns about the novel coronavirus.

The president announced on Oct. 2 he had contracted the disease, but he has returned to the campaign trail after treatment, including several days in a military hospital.

In announcing the Trump town hall on Wednesday, NBC said it obtained a statement on Trump’s health from Clifford Lane, clinical director at the National Institutes of Health.

NBC said Lane and the government’s top infectious disease specialist, Anthony Fauci, concluded “with a high degree of confidence” that Trump was no longer “shedding infectious virus.” Fauci confirmed the statement in an interview with CBS on Wednesday, citing tests that Trump had recently taken.

With less than three weeks until the Nov. 3 election and millions of ballots already cast in early voting, Trump, a Republican, is still searching for ways to change the dynamics of a race in which Biden has a double-digit advantage in national polls.

A record nearly 15 million Americans have cast ballots so far, according to the U.S. Elections Project at the University of Florida as voters seek to avoid in-person lines on Election Day because of the coronavirus pandemic.

Both candidates have been visiting crucial states this week, with Trump holding rallies in Florida, Pennsylvania and Iowa and Biden traveling to Ohio and Florida.

Trump on Wednesday pulled into a statistical tie with Biden in Florida, a key battleground, with 47% support versus Biden’s 49%, and a credibility interval of 4 points, a Reuters/Ipsos opinion poll showed. Biden’s lead widened in Arizona and he had a 10-point advantage nationally among likely voters. [nL1N2H512P]

Trump’s town hall will take place in Miami, while Biden will appear in Philadelphia. The broadcasts are unlikely to draw the massive audience that typically tunes into presidential debates, based on ratings for previous events.

The third presidential debate is scheduled for Oct. 22 in Nashville, Tennessee.