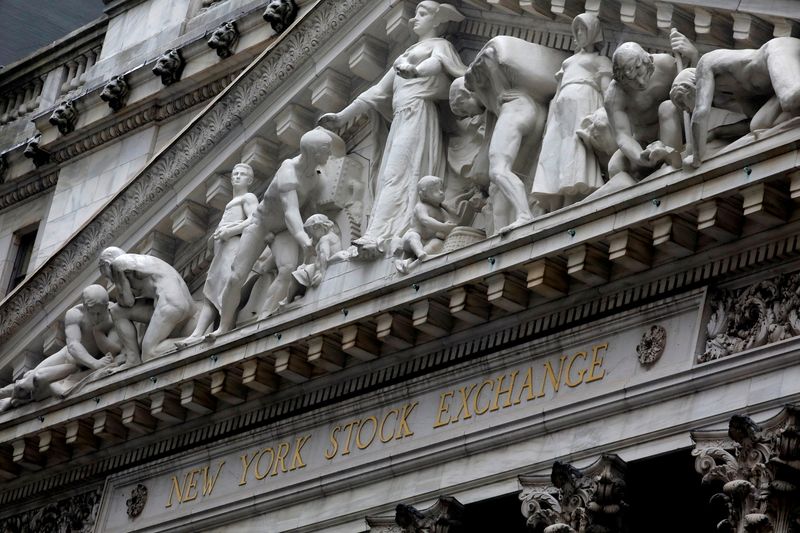 © Reuters. The facade of the New York Stock Exchange is pictured in New York

By Medha Singh and Shivani Kumaresan

(Reuters) – The S&P 500 and the Dow hit their lowest levels since late-September on Wednesday as a surge in coronavirus cases in the United States and Europe dashed hopes of a quick global economic recovery.

Shares of hotels, airlines and other companies sensitive to COVID-19-related curbs fell with Wynn Resorts (O:) down 2% and the S&P 1500 airlines index .SPCOMAIR> declining 3%. The energy index () lost about 3% as oil prices fell on fears of lower fuel demand. [O/R]

New cases and hospitalizations set records in the U.S. Midwest, while concerns over a national lockdown in France and tighter restrictions in Germany sapped investor appetite for risk. [MKTS/GLOB]

“Whether you call it a continuation of the pandemic or a third wave of new case discovery – it is the largest concern,” said Art Hogan, chief market strategist at National Securities in New York.

“Unless and until we get through this pandemic, it is hard for investors to imagine a better economic time.”

A spiraling pandemic and a failure to reach a deal on a fresh round of U.S. fiscal stimulus before the Nov. 3 election have put the blue-chip Dow and the benchmark S&P 500 on track to erase their gains for October.

With just six days to the election, Wall Street’s fear gauge () spiked to its highest level since July 15, also on concerns that a winner might not be declared the night of Nov. 3 due to a delay in counting the huge volume of mail-in ballots.

Democratic challenger Biden leads President Donald Trump nationally by 10 percentage points, according to the Reuters/Ipsos poll, but the competition is tighter in swing states, which will decide the victor.

“The uncertainty of not knowing the direction we are heading is making investors step on the sidelines and wait for the election results,” Hogan said.

Losses were broad-based with technology stocks () weighing the most.

Of the 170 S&P 500 companies that have reported third-quarter earnings so far, about 84% have topped expectations, according to Refinitiv data. Profit on average is expected to fall 16.4% from a year earlier.

Microsoft Corp ‘s (O:) quarterly results surpassed analysts targets, benefiting from a pandemic-driven shift to working from home and online learning. Its shares, however, fell about 4% after rising 35% so far this year.

General Electric Co (N:) was in a bright spot, jumping 8% after posting a surprise quarterly profit and a positive cash flow on the back of cost cuts and improvements in its power and renewable energy businesses.