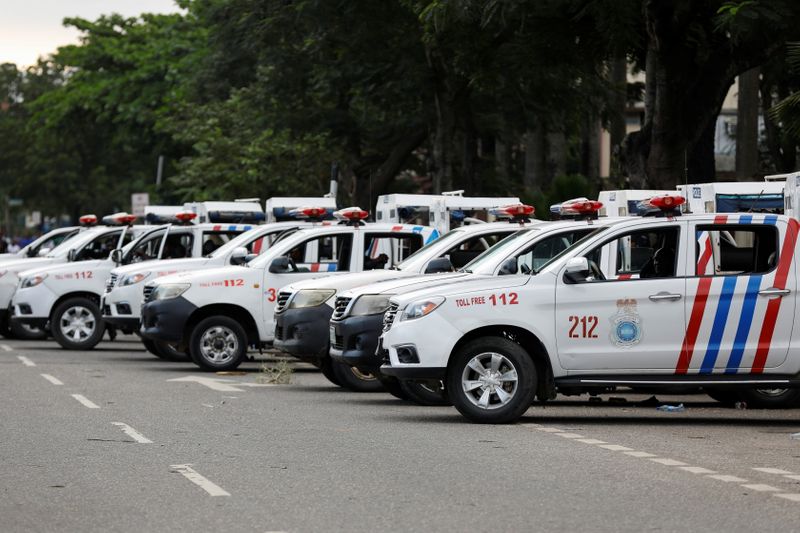 © Reuters. Police vehicles are seen parked during a protest in Lagos

By Alexis Akwagyiram and Libby George

Thousands of Nigerians have demonstrated https://www.reuters.com/article/idUSKBN27418O nationwide every day for nearly two weeks against a police unit, the Special Anti-Robbery Squad (SARS), that rights groups had for years accused of extortion, harassment, torture and murders.

The toll gate in the upmarket Lekki district has been the site of daily protests in Lagos, Africa’s biggest city.

“They started firing ammunition toward the crowd. They were firing into the crowd,” said Alfred Ononugbo, 55, a security officer. “I saw the bullet hit one or two persons,” he said.

The condition of those two people was not immediately known. Amnesty International has said at least 15 people had been killed since the protests began.

Lagos state government said it would open an investigation into the shooting, which witnesses said took place around 7 p.m. (1800 GMT).

“There have been reports of shooting at the Lekki Toll Plaza,” Gboyega Akosile, a spokesman for the governor, said on Twitter. “The State Government has ordered an investigation into the incident,” he said in another tweet.

A Nigerian army spokesman did not immediately respond to requests for comment.

Inyene Akpan, 26, a photographer, said more than 20 soldiers arrived at the toll gate in Lekki and opened fire. He said he saw two people being shot.

Akinbosola Ogunsanya, a third witness, said he saw around 10 people being shot. He also said he saw soldiers remove bodies.

Ten videos seen by Reuters, which were livestreamed on Instagram or posted on Twitter, showed scenes of people running in near darkness and the sound of what appeared to be gunfire. Reuters was not immediately able to independently verify the footage.

A doctor at the private Reddington Hospital in the Victoria Island area of Lagos said people were being treated for gunshot wounds. The doctor, who did not want to be identified, did not specify the number of people being treated.

A spokesman for the president did not immediately respond to requests for comment.

The weeks-long protests were sparked by a video that began circulating in early October purportedly showing SARS https://www.reuters.com/article/idUSKBN2711TK officers shooting a man in southern Delta state.

Police denied the shooting. The SARS was disbanded on Oct. 11, but protests have persisted.

Authorities on Tuesday imposed a round-the-clock curfew on Lagos in response to the protests, which the state governor said had turned violent.

It is one of three of Nigeria’s 36 states to have announced such measures in the last two days, placing millions of people in Africa’s most populous country under curfew.

The southwestern state of Ekiti imposed a curfew hours after the announcement in Lagos. Its governor said protests had been “hijacked” by criminals who sought to “rape, assault, rob and extort innocent citizens”.

The southern state of Edo on Monday imposed a similar curfew after a jailbreak by prisoners during protests. Police said they had strengthened security around prisons nationwide.