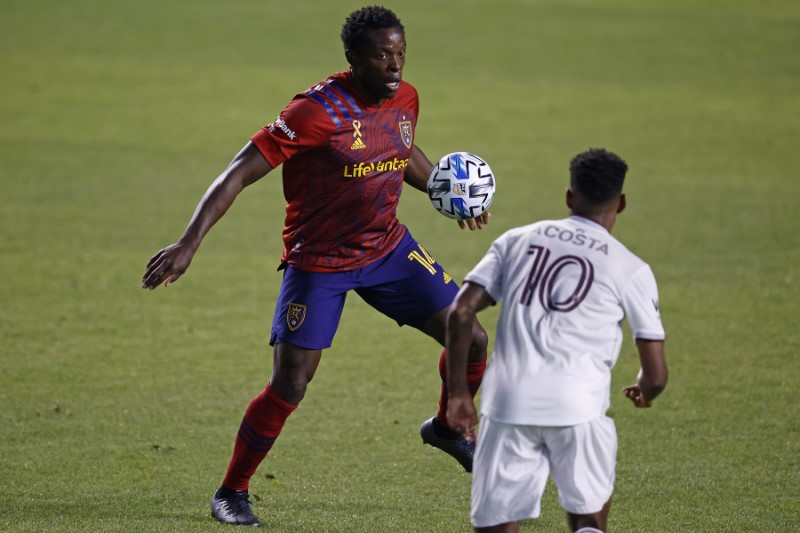 (Reuters) – Players kneeling before games in support of the Black Lives Matter movement will ensure that it remains a topic of conversation and help bring about change, said former Queens Park Rangers (QPR) defender Nedum Onuoha.

Former England striker Les Ferdinand said last week that taking a knee had become nothing short of a PR stunt and that the real message was being diluted.

Ferdinand, who is Black, is director of soccer at QPR. The club was criticised after neither they nor Coventry City knelt before their second-tier Championship match last week.

But Nigerian-born Onuoha told the BBC on Friday, “Les is perfectly entitled to his opinion, but even if 50% of people that kneel don’t believe in it, they’re still kneeling, and as a consequence it can still be a topic of conversation.”

“Even if it’s diluted, it’s still a message in itself,” said Onuoha, who plays for Major League Soccer side Real Salt Lake.

The Black Lives Matter cause was taken up by clubs in England’s Premier League when the 2019-20 season resumed after the COVID-19 hiatus.

Clubs wore Black Lives Matter logos on their shirts, but that has now been replaced by “No Room for Racism”.

“This message of saying that Black Lives Matter and trying to fight against discrimination, it has to be in people’s faces for it to become a topic,” added Onuoha, who has previously said he never feels completely safe in the United States.

“In the United States, if it hadn’t been for people of all races protesting since March, the conversation would get pushed to the side. But because it continued, you can’t ignore it.”