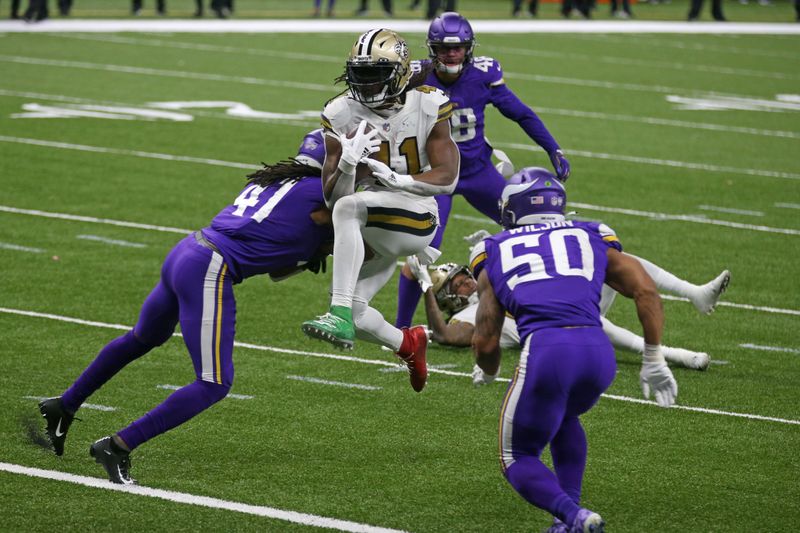 (Reuters) – New Orleans running back Alvin Kamara tied the National Football League (NFL) record for rushing touchdowns in a single game when he crossed the line six times in the Saints’ 52-33 victory over the Minnesota Vikings on Friday.

Kamara equalled the record of Ernie Nevers, who achieved the feat in 1929, with a three-yard run with less than two minutes remaining in the blowout.

The 25-year-old finished with 155 yards rushing on 22 carries. He also had three receptions for 17 yards.

Kamara gave credit to the Saints’ offensive line and the wide receivers for getting his side into scoring position.

“The O-line did a great job. I didn’t really need to do too much,” he said. “The receivers did a great job setting the edge and then coming across and doing the dirty work.

“It just feels good to have one of those games.

“I’m not really focused on personal goals and yards and stuff like that, as long as the team has success, the personal successes will come.”

Only a tactical decision by coach Sean Payton stopped Kamara from possibly setting a new mark of seven rushing touchdowns.

The Saints were leading 38-27 on third and goal on the Minnesota one-yard line in the fourth quarter, and while Kamara was on the sidelines ready to enter the fray Payton decided to run the play without him.

“I wasn’t worried about it,” Kamara said. “Taysom was like ‘my bad’ and I said ‘don’t worry about it, it’s all good, we’ll spread the wealth’.

Kamara later added his sixth touchdown after a 41-yard catch by tight end Adam Trautman had driven the Saints down to the three-yard line.

Kamara’s milestone was not the only one at the Superdome, with Saints’ quarterback Drew Brees becoming the first player to pass for 80,000 career yards.

Brees, who passed for 311 yards in the game on 19-for-26, achieved the milestone when he connected with Latavius Murray on a nine-yard completion early in the second half.

The victory also snared the NFC South division title for the Saints (11-4) for the fourth successive year.