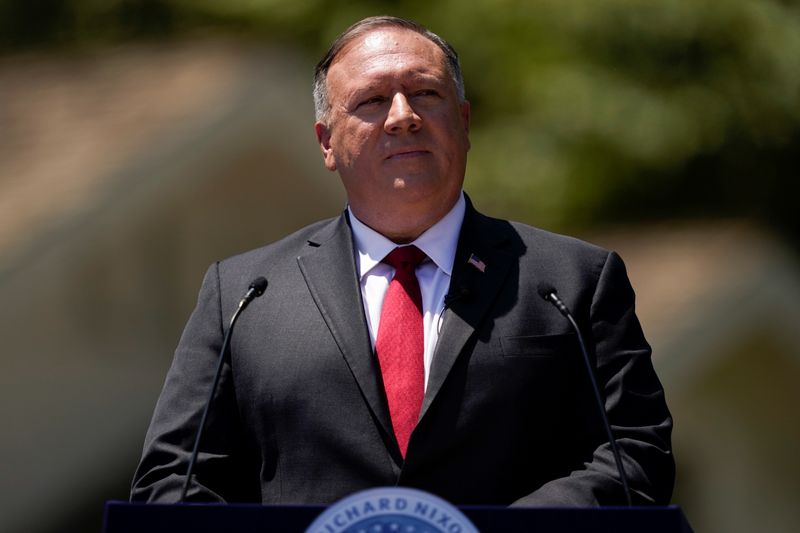 By Humeyra Pamuk and David Brunnstrom

WASHINGTON (Reuters) – U.S. Secretary of State Mike Pompeo announced on Wednesday the State Department was designating the U.S. operations of six more China-based media companies as foreign missions, a move he said was aimed at pushing back against communist propaganda.

Pompeo also told a State Department news conference the United States would launch a dialogue on China with the European Union on Friday and that on Sunday he would begin a trip to India, Sri Lanka, the Maldives and Indonesia.

He said he expected the meetings would include discussions about how “free nations can work together to thwart threats posed by the Chinese Communist Party.”

The State Department named the newly designated publications as the Yicai Global, Jiefang Daily, the Xinmin Evening News, Social Sciences in China Press, the Beijing Review, and the Economic Daily. It brought to 15 the number of Chinese media outlets so designated this year.

It was the latest U.S. step to curb Chinese activity in the United States in the run-up to the Nov. 3 presidential election, in which President Donald Trump has made a tough approach to China a key foreign policy theme.

Pompeo said the move was part of efforts to push back against “Chinese communist propaganda efforts” in the United States.

“They are also substantially owned, or effectively controlled by a foreign government,” he said.

“We are not placing any restrictions on what these outlets can publish in the United States; we simply want to ensure that American people, consumers of information can differentiate between news written by a free press and propaganda distributed by the Chinese Communist Party itself. Not the same thing.”

China’s embassy did not immediately respond to a request for comment.

Washington designated four major Chinese media outlets as foreign embassies in June and five in February. The designation requires the outlets to inform the U.S. State Department of their personnel rosters and real-estate holdings.