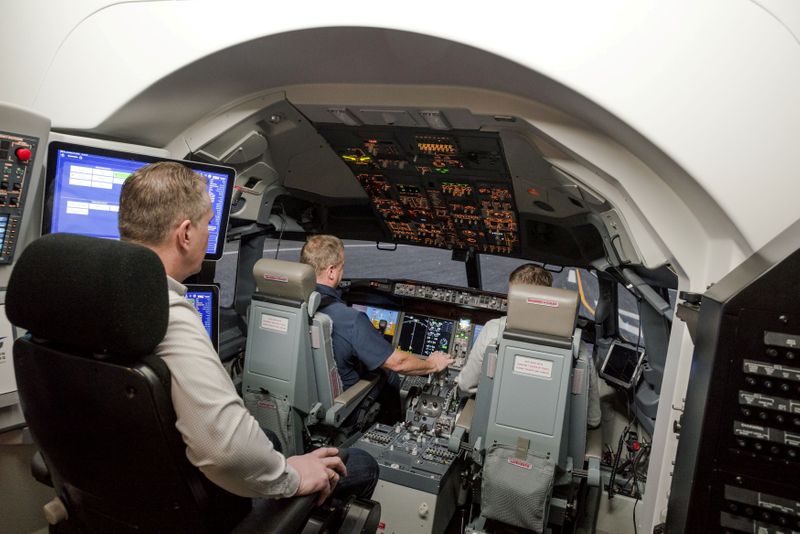 © Reuters. FILE PHOTO: FILE PHOTO: An inside view of the Icelandair Boeing 737 MAX training simulator in the TRU Flight Training Iceland in Reykjavik

The proposal about an erroneous “stick shaker” alert is among recommendations the Air Line Pilots Association (ALPA) and the Allied Pilots Association submitted during a 45-day public comment period for proposed 737 MAX design and operating changes laid out last month by the U.S. Federal Aviation Administration (FAA).

Monday was the deadline for comments.

The 737 MAX changes could pave the way for the FAA to lift a ban on the jet, potentially before year-end. The 737 MAX was grounded worldwide 18 months ago after crashes killed 346 people in Ethiopia and Indonesia.

In both crashes, pilots grappled with Boeing’s flawed MCAS flight control system, which repeatedly forced down the jet’s nose, and multiple audio and visual warnings that included the rapid and noisy rattling of their control column known as “stick shaker” and excess speed.

The proposals, which include recommendations for pilots during emergency situations, came during a U.S.-led gathering of regulators in the UK for a training review of the MAX.

While the FAA is in charge of certifying the MAX, other regulators like Transport Canada and the European Union Aviation Safety Agency (EASA) could add different training requirements as part of their validation of the aircraft.

ALPA proposed steps that would allow flight crews to identify and pull a circuit breaker to stop the stick shaker after they confirm an alert is erroneous, echoing an earlier recommendation by Transport Canada.

Separately, the Allied Pilots Association, which represents American Airlines (NASDAQ:)’ pilots, also asked on Monday for a checklist to disable erroneous stick shaker activation as well as an overspeed warning.

The union said the FAA should condense a checklist for dealing with a loss of control called runaway stabilizer to help pilots “more rapidly isolate the problem.”

Among other comments, the National Transportation Safety Board has called the FAA’s proposed changes “positive progress,” while crash victims’ families have said Boeing’s changes to MCAS do not address the jet’s underlying aerodynamic problem.

Meanwhile, Boeing whistleblower Curtis Ewbank has urged additional protections, while the British Airlines Pilots Association has called for Boeing to add a third “angle of attack” sensor to the jet.