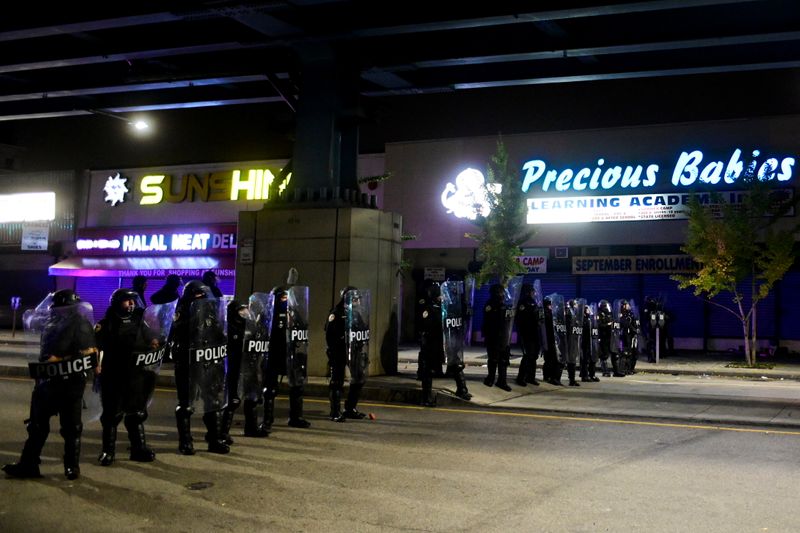 © Reuters. Police officers line up as demonstrators take part in rally after the death of Walter Wallace Jr., a Black man who was shot by police in Philadelphia

PHILADELPHIA (Reuters) – Philadelphia has imposed a city-wide curfew starting Wednesday at 9 p.m. to try to prevent a third night of looting and violence amid widespread protests over the police killing of a Black man.

The curfew will run through Thursday at 6 a.m., Philadelphia Mayor Jim Kenney and other officials told a briefing.

Tension has gripped the streets of Philadelphia since Monday’s deadly police shooting of Walter Wallace, 27, who was armed with a knife and described by relatives as suffering from a mental breakdown, in a confrontation with law enforcement.

Philadelphia police have made 172 arrests and 53 officers have been injured in two nights of protests that were marked by significant looting of big-box stores and other businesses, some of which were still recovering from unrest in the summer.

City officials said as many as 1,000 people were involved in looting in one corner of the city on Tuesday night, catching the police force off guard.

“These individuals are doing nothing but simply wasting our precious resources,” Philadelphia Police Commissioner Danielle Outlaw said at the briefing, lamenting what she described as “widespread lawlessness” in Pennsylvania’s biggest city.

The unrest has turned Philadelphia into the latest flashpoint in the United States on issues of race and police use of force just days ahead of Tuesday’s presidential election.

U.S. President Donald Trump, who is seeking a second term in office, has made policing a top campaign issue, calling for a tough “law and order” stance on the protests. In Nevada on Wednesday, Trump said the events in Philadelphia were “terrible” and offered to send federal help.

“What I’m witnessing is terrible and frankly that the mayor or whoever it is that’s allowing people to riot, and loot and not stopping them is also just a horrible thing,” he said.

Pennsylvania is a crucial battleground state in the race between Trump and Democratic challenger Joe Biden, who has said he supports the police but wants to address racial inequalities, among other issues.

Pennsylvania Governor Tom Wolf, a Democrat, said on Wednesday his administration stood ready to help the city with the unrest, including to “avoid unnecessary harm to businesses that provide services to affected neighborhoods.”

“We must address the systemic problems that cause tragedies against people of color,” Wolf said on Twitter.

On Tuesday, Wolf ordered several hundred National Guard officers to prepare to assist Philadelphia. Mayor Kenney said the Guard would be brought in to “safeguard property and prevent looting” without providing a time frame.

Tuesday’s rallies began peacefully but grew confrontational as darkness fell, just as on the previous day.

Police turned out in force to cordon off a West Philadelphia commercial district that was looted the previous night.

But looters broke into businesses elsewhere, including in the city’s Port Richmond section, aerial news video from WPVI television showed. At times, police in riot gear shoved protesters back from barricade lines.

The violence erupted despite the pleading of the dead man’s father, Walter Wallace Sr., who on Tuesday urged people to “stop the violence” out of respect for his son and family.

“I don’t condone no violence, tearing up the city, looting of the stores, and all this chaos,” he told reporters and a gathering of people. “It’s an SOS to help, not to hurt.”

He also called for justice in a case still being investigated.

The unrest in Philadelphia follows that in other cities where police have killed Black men.

Tensions have stayed high at demonstrations across the nation since the May 25 death of George Floyd after a Minneapolis police officer knelt on his neck for nearly 9 minutes.

Outlaw said the city would release the bodycam footage and the 911 call records related to the shooting of Wallace after the family had been given a chance to review the materials.