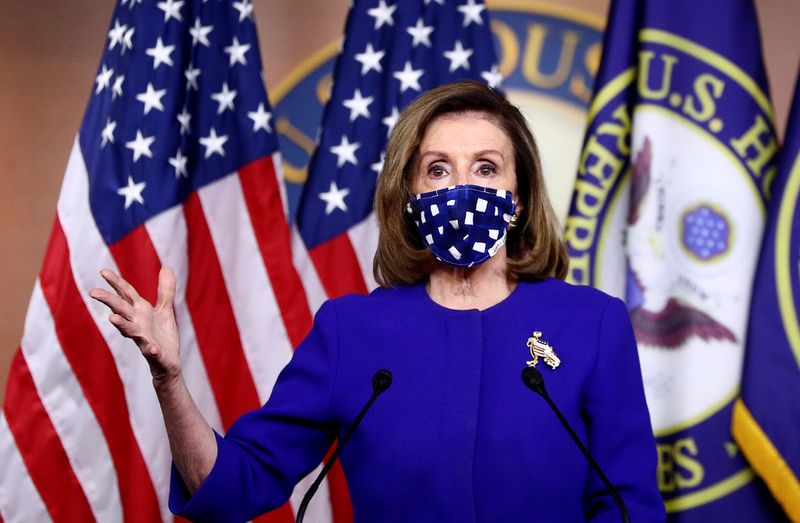 By Susan Cornwell and Susan Heavey

WASHINGTON (Reuters) – U.S. House Speaker Nancy Pelosi said on Friday it still was possible to get another round of COVID-19 aid before the Nov. 3 general election, but that it was up to President Donald Trump to act, including bringing along reluctant Senate Republicans.

Trump and Treasury Secretary Steven Mnuchin countered that Pelosi must compromise to get an aid package, saying significant differences remained between the Republican administration and Democrats.

“Now we’re talking and we’ll see what happens but at this moment I would say that I actually think Nancy would rather wait ’til after the election,” Trump told reporters in an Oval Office appearance together with Mnuchin.

“If she wants to compromise, there will be a deal,” Mnuchin said.

Pelosi, the top Democrat in Congress, has been negotiating with Mnuchin to try to reach an agreement that could be worth around $2 trillion before the presidential and congressional election.

Congressional committees and staff will work on a possible deal through the weekend, and Pelosi and Mnuchin “will speak again once additional progress is made,” Pelosi’s spokesman, Drew Hammill, wrote on Twitter Friday evening.

Senate Republicans are skeptical of a possible deal costing trillions of dollars. Senate Majority Leader Mitch McConnell, the top Republican in Congress, does not want to bring a large bill to the Senate floor before the election.

Congress has already appropriated $3 trillion in relief, including money for the unemployed and for small businesses. But no money has gone out the door since the spring, and members of both parties say more is needed now.

Pelosi, in an interview on MSNBC, said differences could still be resolved.

“We could do that before the election if the president wants to,” she said. “He (Trump) has to talk to the Senate Republicans.”

Republican Senator Richard Shelby told reporters that he had spoken at length to Mnuchin on Thursday, and had asked him for details of his talks with Pelosi.

“I told him honestly that we need particulars,” Shelby said on Friday. A Shelby aide said no specifics had been provided.

Shelby, who chairs the Senate appropriations committee, remained skeptical that a deal could be reached before the Senate is expected to leave town next week to campaign.

At the White House, Mnuchin said there had been lots of progress but “significant differences remained,” while Trump reiterated that he did not support more federal financial aid for U.S. states and cities run by Democrats.

“She wants to bail out poorly run Democrat states – they’re poorly run both in terms of crime and in terms of economics. And we just don’t want that. We want COVID related,” Trump said.