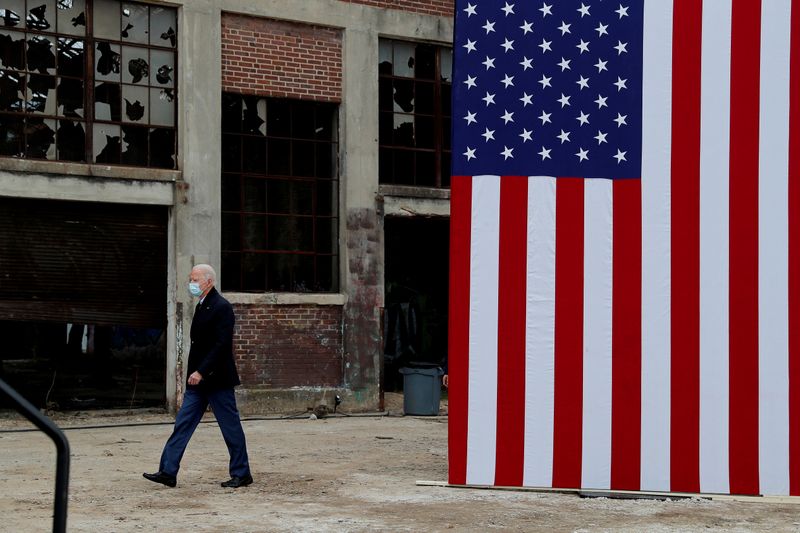 WASHINGTON (Reuters) -More than 1.1 million Georgians have voted in twin U.S. Senate runoff elections that will determine which party controls that chamber of Congress, and with it the fate of much of Democratic President-elect Joe Biden’s agenda, state data showed on Friday.

The surge in turnout after four days of early in-person voting, and about four weeks of mail-in voting, showed that voter participation in the two races is on pace to rival the records set in the November presidential contest in which Biden defeated Republican incumbent Donald Trump.

State data published on Friday showed the number of accepted ballots was just below the level seen at the same point in early voting for November’s election.

Voting in the Senate runoffs, which are taking place because no candidate won 50% support on Nov. 3, ends on Jan. 5.

Biden’s razor-thin victory in Georgia last month amid record-high turnout underscored the Southern state’s transformation from Republican stronghold to one of the country’s most competitive political battlegrounds.

A record 159 million people nationwide voted in November, up from 138 million in the November 2016 elections, according to data compiled by Michael McDonald, a political scientist at the University of Florida. He estimated that nearly 67% of U.S. eligible voters voted last month, the highest share since 1900.

Signs of high turnout in January’s Senate contests in Georgia point to another squeaker, analysts said.

“This is going to be a really close election,” said McDonald, who is tracking early voting in Georgia.

He said comparing current turnout with the November cycle is tricky. It was possible that voters have crowded the polls to be done with voting ahead of the December holidays.

“It does seem to me like we’re in for a higher turnout election than is typical for a runoff,” McDonald said.

Democrats need to win both contests to achieve a 50-50 split in the Senate, which would give Vice President-elect Kamala Harris the tie-breaking vote. Even one Democratic loss would allow Republicans to keep a razor-thin majority they could use to block many of Biden’s legislative goals and judicial nominees.

Ballots accepted through Thursday were only just below the 1.2 million that were cast at the same point in the November election, when turnout eventually totaled about 5 million votes.

Roughly 2 million votes were cast in the last runoff for a Senate seat in Georgia, when Republican Saxby Chambliss defeated Democrat Jim Martin in 2008. Nearly 4 million Georgians voted in the 2018 congressional midterm elections.

Republicans have often performed better in low-turnout elections. But voters in both parties appear energized by the stakes in the January contest and each party has poured resources into Georgia ahead of the vote.

Biden returned to the campaign trail on Tuesday to stump for Warnock and Ossoff in Georgia, and Harris will campaign for the Democrats there on Monday. Trump, who has refused to concede that he lost the November election, has also campaigned in Georgia for Perdue and Loeffler, as will his daughter and adviser Ivanka Trump on Monday.

Republicans maintain that holding control of the Senate will help keep Washington from veering hard to the left under Biden.

But Trump’s involvement in the contests, and his unsubstantiated claims that Biden won because of widespread voter fraud, could be fueling high turnout among Democrats, according to Jessica Taylor, an analyst at the Cook Political Report who sees the Senate races as toss-ups for either side.

“It’s not just Republicans that are enthused to come out to keep a firewall in the Senate, but Democrats (saying) ‘We beat Trump and he still won’t quit,'” Taylor said.