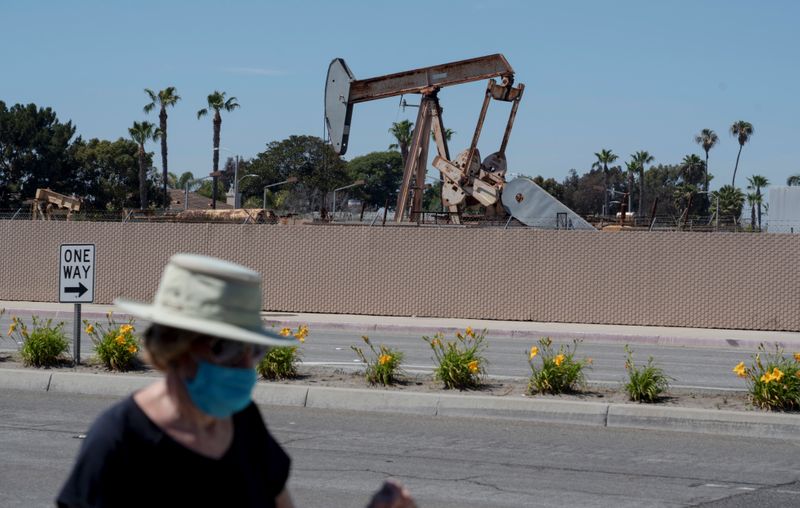 © Reuters. A pedestrian wearing a protective mask walks past an oil derrick in Huntington Beach

SINGAPORE (Reuters) – Oil prices slipped on Wednesday on concerns that fuel demand will continue to falter as rising coronavirus cases across Europe and in the United States, the world’s biggest oil consumer, could impede economic growth.

The Organization of the Petroleum Exporting Countries (OPEC) said in its monthly report on Tuesday that oil demand in 2021 will rise by 6.54 million barrels per day (bpd) to 96.84 million bpd, 80,000 bpd less than its forecast a month ago, as a result of the economic dislocations caused by the coronavirus pandemic.

The heads of two of the world’s biggest oil producers, Russian President Vladimir Putin and Saudi Crown Prince Mohammed bin Salman, discussed the current situation in the energy markets during a telephone call, the Kremlin said on Tuesday.

OPEC and producer allies such as Russia, a group known as OPEC+, will stick to their plans to taper oil production cuts from January, Suhail al-Mazrouei, the energy minister of the United Arab Emirates said on Tuesday.

“Oil prices are steady in Asia as the dollar rally takes a break and as the Russian and Saudis show a united front in making OPEC+ oil producers live up to their pledged output cut promises,” said Edward Moya, a senior market analyst at OANDA.

“Crude prices are looking very vulnerable as the coronavirus continues to spread like wildfire across Europe and trending higher in the U.S.,” Moya added.

On the supply side, crude oil production in the U.S. Gulf of Mexico continued to recover four days after Hurricane Delta made landfall with the amount shut falling to 44% on Tuesday from 69% on Monday.

The poll was conducted ahead of reports from American Petroleum Institute and the Energy Information Administration. Both the reports were delayed by a day because of the Columbus day holiday on Monday in the United States.