No progress in Kyrgyz impasse as businesses warn of economic damage 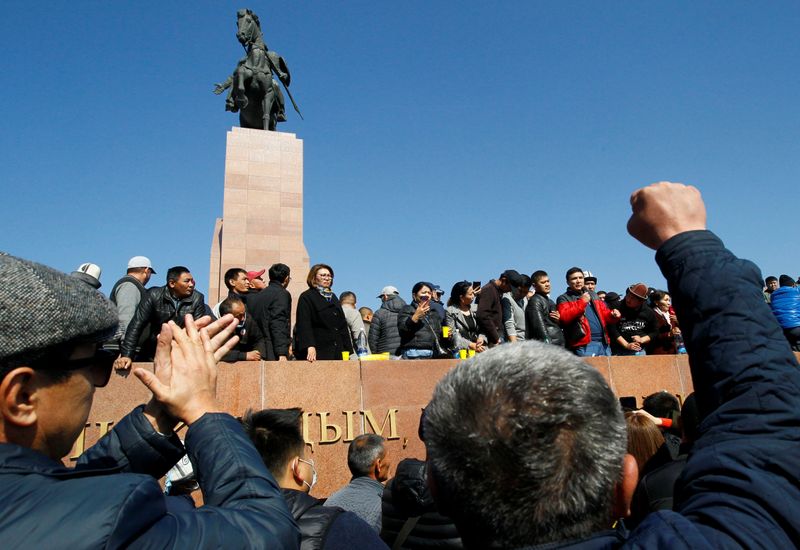 © Reuters. People attend a rally following post-election protests during which opposition groups took control of most of the government’s apparatus, in Bishkek

BISHKEK (Reuters) – Kyrgyzstan’s parliament has failed to gather a quorum in an overnight session, deputies said on Thursday, leaving the Central Asian nation in a power vacuum as rival groups tried to claim power after ousting the cabinet.

The former Soviet republic, which borders China and hosts a Russian military airbase, has been gripped by unrest since thousands of people protesting against the results of a parliamentary election seized government buildings on Tuesday.

Three opposition groups have each proposed their candidates for interim prime minister who would need to oversee a repeat vote in the coming months, Kyrgyz news website Akipress quoted deputy Ryskeldi Mombekov as saying.

In addition to Sadyr Zhaparov and Tilek Toktogaziyev who have already made their ambitions clear this week, Mombekov said Omurbek Babanov, who has already served as the cabinet head, has also emerged as a contender.

But the outgoing parliament has itself split into two groups which were meeting separately outside the headquarters ransacked by protesters, Mombekov said, and the group that met overnight in a hotel only included 40 MPs, whereas major decisions such as naming a cabinet require a 61-vote majority.

Another MP, Elvira Surabaldieva, posted a video from the meeting online, saying it had failed to pass a motion to impeach President Sooronbai Jeenbekov.

Meanwhile, Kyrgyzstan’s central bank allowed local financial institutions, closed since Tuesday, to reopen on Thursday as Kyrgyz business associations warned the nation of 6.5 million could face food shortages if banks and tax offices remained shut and public safety could not be guaranteed.

Sunday’s election handed the victory to two establishment parties, one of them closely linked to President Jeenbekov. Eleven other parties refused to accept the results and the central election commission annulled them on Tuesday as it became clear Jeenbekov was losing his grip on power.

The embattled president has since not appeared in public, although his office said he remained in the capital, Bishkek, and Jeenbekov issued several statements calling for talks between rival political factions.

One person has been killed and over a thousand people have sought medical help since the unrest began, as vigilante units formed by Bishkek residents scuffled with protesters and looters.