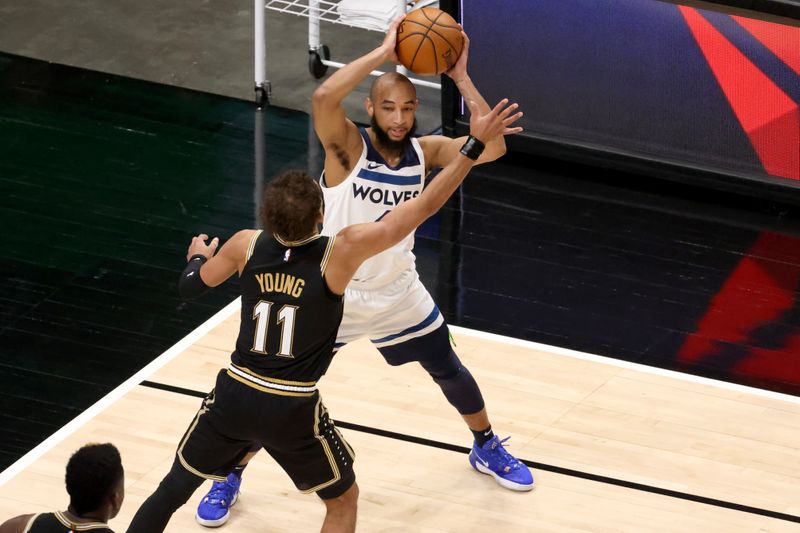 De’Andre Hunter scored a season-high 25 points and Clint Capela recorded his fourth straight double-double to help the Atlanta Hawks to a 108-97 win over the visiting Minnesota Timberwolves on Monday.

Hunter had to leave the game momentarily in the first quarter when he cut his right hand, but he returned to go 8-for-15 from the field, including 3 of 6 from 3-point range. Capela scored 23 points, two shy of his season high, and grabbed 15 rebounds, his second straight game with that many boards.

The Hawks, debuting their unique black uniforms with “MLK” on the front of the jerseys, ended a two-game losing streak. Atlanta entered the game having lost six of the past seven. Minnesota has lost two in a row and nine of its last 10.

Minnesota got 31 points, seven assists and four steals from D’Angelo Russell, who sank six 3-pointers, and 15 points from Malik Beasley.

The Timberwolves were without Karl-Anthony Towns, Juancho Hernangomez and Ricky Rubio, who are dealing with COVID-19 issues. The Hawks were without Cam Reddish, who missed his second straight game with a left knee contusion.

Minnesota scored the first seven points of the third quarter and tied the game at 58 on a basket by Naz Reid with 10:35 left in the stanza. But Collins responded with a 3-pointer to spark a 17-3 Atlanta run that gave the Hawks a 75-61 lead with 4:30 remaining. Atlanta took a 78-71 advantage into the fourth quarter.

Atlanta led 93-78 with 5:59 left on a 3-pointer by Hunter. The Timberwolves three times cut the deficit to six points before falling short.