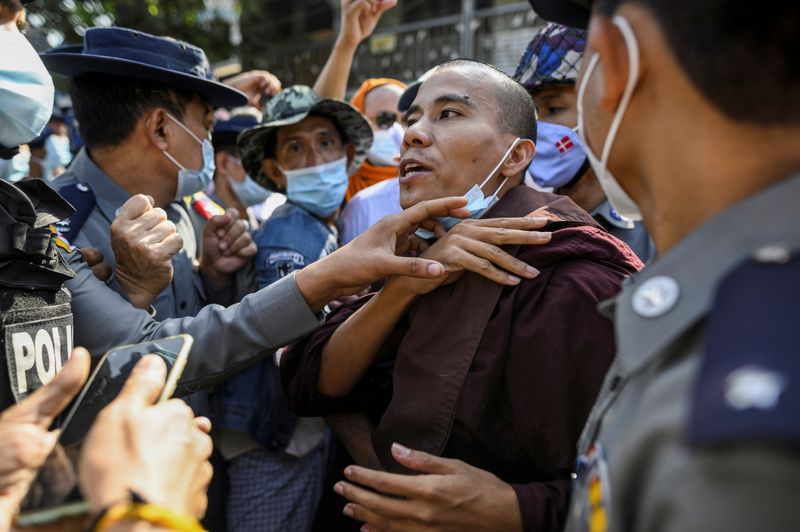 © Reuters. Police detain a Buddhist monk while he takes part in a protest in support of the jailed nationalist right wing monk Wirathu outside Insein prison in Yangon

YANGON (Reuters) – Myanmar police scuffled on Saturday with dozens of followers of Buddhist nationalist monk Ashin Wirathu at a demonstration calling for him to be put on trial more than two months after he handed himself in to face sedition charges.

Protesters, many of them monks, gathered outside the Insein Prison in Myanmar’s main city of Yangon, where Wirathu has been held since November last year.

Police said they had not set out to break the protest up but had been provoked and has arrested one protester.

“We were trying to negotiate and that man talked back rudely and started fighting,” Tin Latt, the head of Insein police station, told Reuters by phone.

The protest by about 50 people dispersed after the scuffle.

Wirathu is known for his rhetoric against minority Muslims, particularly the Rohingya community. But he has also been critical of the civilian government of Aung San Suu Kyi and supportive of Myanmar’s powerful military.

“Although he handed himself courageously and decisively to face trial, he was not brought to court or given a verdict,” one monk at the protest told reporters. He said other prisoners in custody should also be brought to trial.

Wirathu faces trial under a law that prohibits bringing “hatred or contempt” or exciting disaffection toward the government. It carries a prison sentence of up to three years.

He denies wrongdoing. He handed himself in after more than a year on the run.