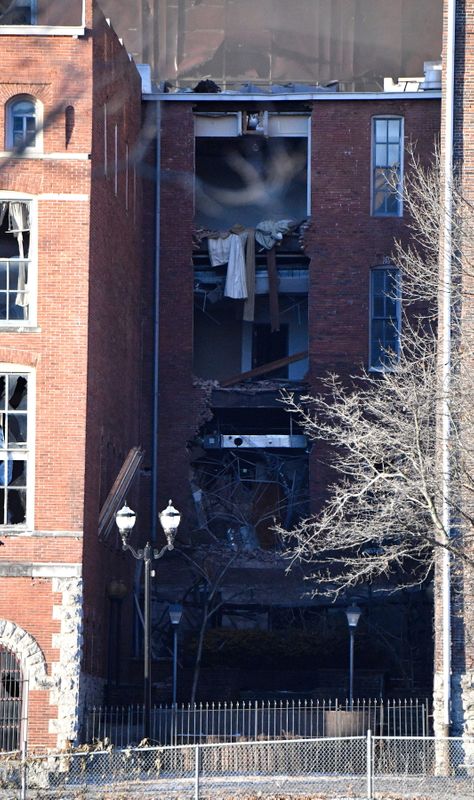 © Reuters. A damaged building is seen near the site of an explosion in the area of Second and Commerce in Nashville

By Rich McKay and Katanga Johnson

(Reuters) -A parked motor home exploded on a tree-lined street in downtown Nashville at dawn on Friday morning minutes after a recorded announcement emanating from the vehicle warned of a bomb, in what police said was an “intentional act” that injured at least three people.

Police said it was unclear whether anyone was inside the recreational vehicle at the time. CNN, citing unnamed sources, reported hours later that investigators had found possible human remains near the site of the explosion.

The Christmas Day blast, which rocked the heart of America’s country music capital, came just moments after officers responded to reports of gunfire in the area and discovered the recreational vehicle parked outside a downtown office tower at about 6 a.m. CST (1200 GMT).

Officers quickly went door-to-door in nearby buildings to hustle people to safety, and called for dispatch of the police bomb squad, which was on its way to the scene when the vehicle blew up, police spokesman Don Aaron said.

The Metro Nashville Police Department posted a photo of the recreational vehicle on its Twitter feed and said that the vehicle had arrived in the area at 1:22 a.m.

The blast ravaged the heart of the city, considered the capital of the U.S. country music industry. It destroyed several other vehicles and severely damaged several buildings, sending a pall of black smoke into the sky that could be seen for miles.

“Obviously, they heard the announcements coming from this vehicle,” Aaron told reporters. “They took them seriously. And worked to seal the streets to protect folks and we think it worked.” He called the blast “an intentional act.”

The Federal Bureau of Investigation said on Twitter that its agents were assisting in the probe and seeking information from digital media about the blast.

Andrew McCabe, a former deputy FBI director, told CNN an explosion of this size would be investigated as a possible act of terrorism, whether domestic or international.

Police did not offer a possible motive for the apparent bombing. McCabe said police may have been the target of the explosion given they were called to the scene beforehand.

Nashville’s vice mayor, Jim Shulman, told CNN that the incident appeared to have been a solitary act, and that investigators did not believe there was an ongoing threat of further bombings.

Most of the buildings on the tree-lined street with shops and offices were closed given the early hour of the day and the Christmas holiday, helping to keep injuries to a minimum.

The explosion, which could be heard for miles and was felt nine blocks away, knocked one officer off his feet and caused what was hoped to be only a temporary hearing loss, the police spokesman said.

President Donald Trump was briefed on the explosion, a White House spokesman said.

Car bombings in the United States are rare.

A 1995 truck bombing in Oklahoma City killed 168 people including 19 children, and wounded hundreds. Timothy McVeigh was executed by lethal injection in June 2001 for the attack.

In April 2010, a food vendor foiled an attempt to set off a car bomb in New York’s Times Square.