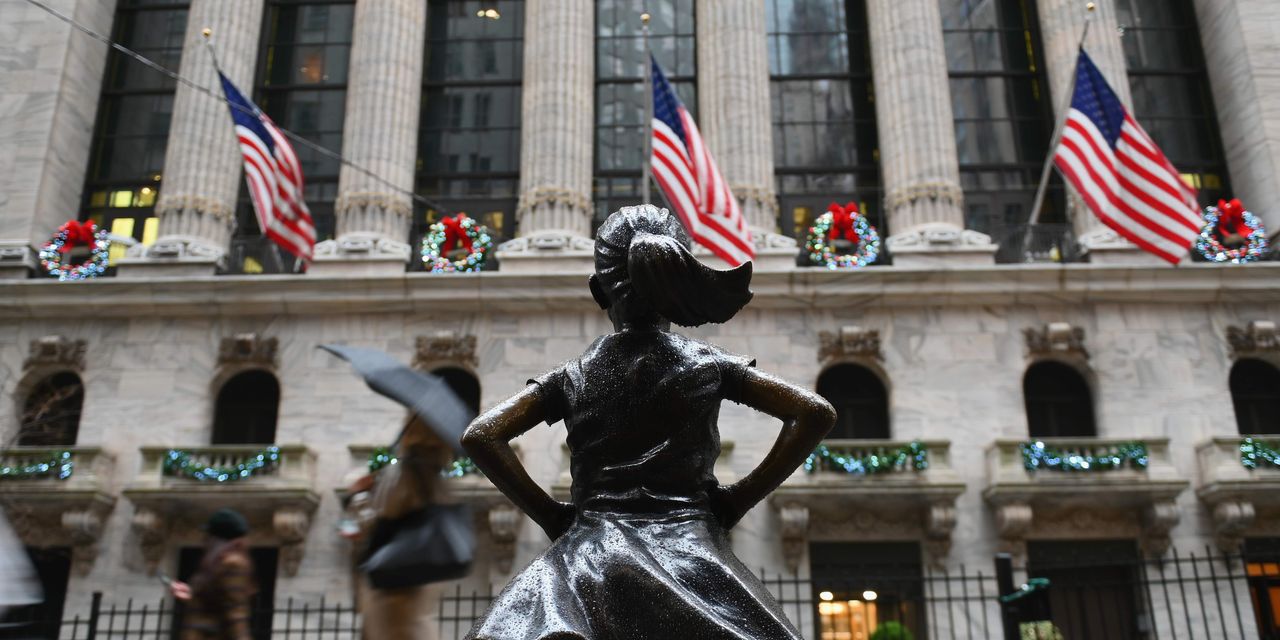 How are equity benchmarks faring?

On Tuesday, the Nasdaq notched its 54th record close of 2020 and the Russell 2000 index recorded its 12th all-time high finish:

U.S. stock indexes are seeing muted moves in the short Christmas week, with Wall Street trading volumes thinner, despite a number of developments on the coronavirus aid bill passed by Congress on Monday.

Lighter volumes as investors position for 2021 may make the markets more vulnerable to reports on the progress of the COVID-19 pandemic, which is expected to cause a grim holiday season.

Markets also were waiting on more detail following reports that a Brexit deal had been reached. The yield curve steepened, and the pound surged.

The number of COVID deaths spiked up to 3,239 on Tuesday, representing the third-highest daily total ever, from 1,962 on Monday, according to data provided by the New York Times. Hospitalizations jumped by 2,426 patients to a record 117,777 on Tuesday, COVID Tracking Project data show.

Meanwhile, after Congress finally approved a $900 billion relief bill President Donald Trump called it an “unsuitable disgrace” late Tuesday, raising the possibility that he may not sign the bill into law by the Dec. 28 deadline and may throw into disarray months of negotiations on fiscal aid for unemployed Americans and troubled businesses. Trump is advocating for stimulus checks of $2,000 rather than the $600 that is currently a part of the new relief bill.

Markets have been trading in a range ever since mid-November, and any hopes that a better-than-expected stimulus package would jolt stocks higher fell by the wayside this week, noted Andrew Smith, chief investment strategist of Dallas-based Delos Capital Advisors.

“There’s a feeling of, ‘finally, it’s done,’ but there was really nothing in there that helps states and municipalities, and the unemployment benefits only last until March,” Smith said in an interview. “That Santa Claus rally we typically get? I’m sorry, but this isn’t helping.”

Smith thinks that eventually investors may shake off some of the lingering concerns that have built up over the past few weeks, including the variant strain of coronavirus and uncertainty about President-elect Joe Biden’s economic plan, but it’s just as likely markets will see a slight correction before that happens, he said.

Meanwhile, some analysts are pinning their hopes on Trump’s overtures toward more stimulus for Americans. “Trump wants a substantial coronavirus stimulus package that might make a difference for households,” wrote Edward Moya, senior market analyst at Oanda, in a daily research note.

“Something needs to get done by December 28th and right now markets are expecting that we could see a last-minute tweak that provides more stimulus for Americans,” he said.

Market participants have been uneasy this week in part because of reports of a variant strain of coronavirus, leading to intensified lockdowns in parts of Europe to limit contagion. In Europe, France reopened its border with the U.K. on Wednesday following a ban aimed at preventing the new strain from entering the country.

as well as from Moderna
MRNA,

should be effective against the new virus strain. Early Wednesday, Pfizer also confirmed a report that the U.S. had paid for an additional 100 million of its two-dose vaccine.

U.S. economic data out Wednesday was mixed on Wednesday. There were 803,000 applications for jobless benefits in the most recent week, a decline of 89,000 from the prior week though the labor market overall remains weak. Personal incomes slid 1.1% in November and consumer pending fell 0.4%, as did the Michigan Consumer Sentiment reading, and new home sales. But durable goods orders rose for a seventh straight month though signs of a slowdown are emerging.

Which stocks are in focus?

were in focus on Wednesday, after the big-data software company said it signed a new two-year contract with the U.K.’s National Health Service.

slipped in early trade Wednesday before reversing to gain 0.6%.

may draw attention on Wednesday after the company late Tuesday revealed positive results from a study of its potential drug for attention-deficit hyperactivity disorder, or ADHD.

How are other assets faring?