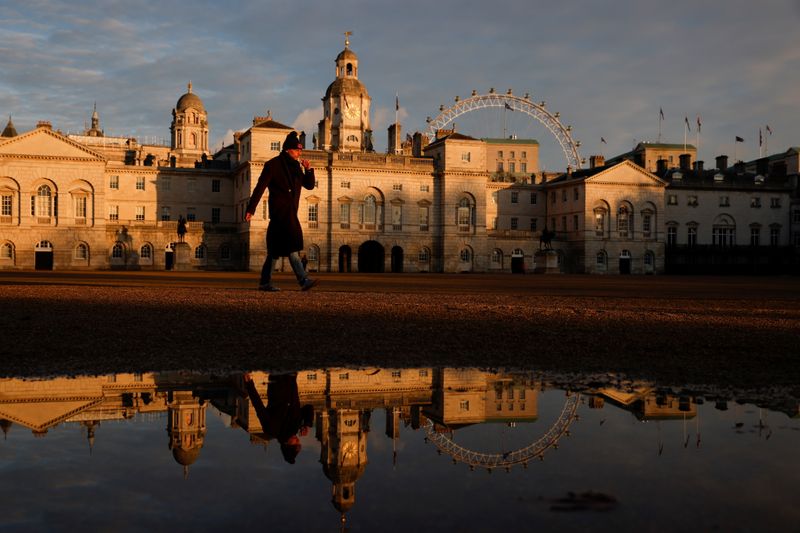 © Reuters. A man walks across Horse Guards Parade in the late afternoon in London

By Alistair Smout and Estelle Shirbon

LONDON (Reuters) – A field hospital in London will be used if necessary to relieve pressure on other hospitals in the city, the British health minister said on Thursday after leaked official documents suggested London risked running out of beds within two weeks.

Projections leaked to the Health Service Journal showed that even if the number of COVID-19 patients increased at the lowest rate considered likely, London hospitals would be short of nearly 2,000 acute and intensive beds by Jan. 19.

Asked about the projections, Health Secretary Matt Hancock said he was concerned about the pressures on the National Health Service (NHS) and the government was putting extra resources into the parts of the country under the most significant strain.

“For instance in London, (we’re) making sure that the Nightingale hospital is on standby and there, if needed. And if it is needed, of course, then it will be used,” he said, referring to a field hospital that was set up at the start of the pandemic.

England began a new national lockdown on Tuesday, with schools closed and citizens under orders to stay at home, as the government sought to contain a surge in infections, partly driven by a highly contagious new coronavirus variant.

On Wednesday, the daily number of deaths from COVID-19 across the United Kingdom surpassed 1,000 for the first time since April. The country’s total COVID-19 death toll since the start of the pandemic is over 77,300, the highest in Europe.

London and the southeast of England have been the areas worst-hit by the new variant.

The Nightingale hospital, based at the ExCel conference centre in east London, was originally set up for COVID-19 critical care, but only 51 patients were treated there before it was mothballed in May.

The British Medical Journal reported that it was being repurposed to take non-COVID patients recovering from operations and procedures, in order to relieve the unprecedented demand for beds elsewhere.