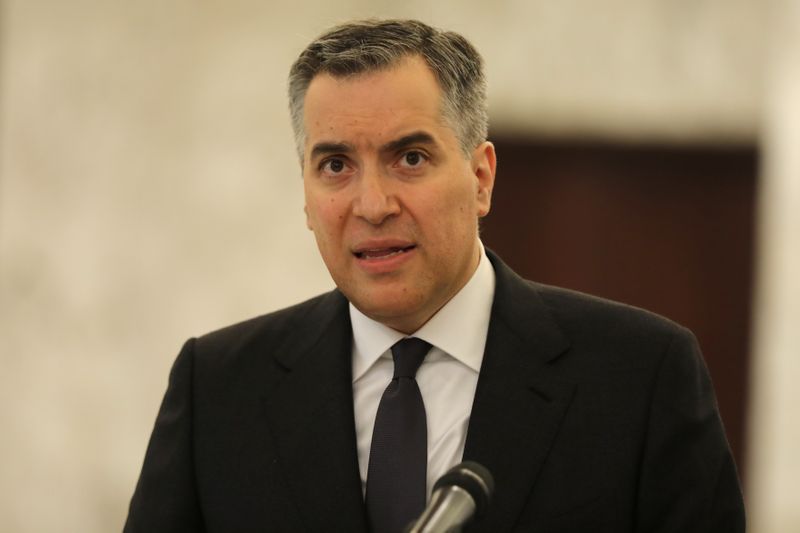 © Reuters. Mustapha Adib, talks to the media after being named Lebanon’s new prime minister at the presidential palace in Baabda

By Edmund Blair and Raya Jalabi

BEIRUT (Reuters) – Lebanon’s prime minister-designate quit on Saturday after trying for almost a month to line up a non-partisan cabinet, dealing a blow to a French bid aimed at rallying sectarian leaders to tackle the worst crisis since the nation’s 1975-1990 civil war.

Mustapha Adib, former ambassador to Berlin, was picked on Aug. 31 to form a cabinet after President Emmanuel Macron intervened to secure a consensus on naming him.

Under the French roadmap, the new government would take swift steps to tackle corruption and implement reforms needed to trigger billions of dollars of international aid to fix an economy that has been crushed by a mountain of debt.

The nation took a further knock when a huge explosion on Aug. 4 at Beirut port ruined a swathe of the capital.

Adib, a Sunni Muslim based on the sectarian system of power sharing, announced he was stepping down but said Lebanon must not abandon the French plan or squander Macron’s goodwill.

“I stress that this initiative must continue,” he said after meeting President Michel Aoun, a Christian. He wished his successor well in the “hard task” of forming a government.

Adib had sought to form a government of specialists in a nation where power is shared between Muslims and Christians and political loyalties tend to follow confessional lines.

Politicians had promised Paris they would have a government in place by mid-September. But Adib’s efforts stumbled over how to make appointments, particularly the post of finance minister, who will have a key role in drawing up an economic rescue plan.

Talks with the International Monetary Fund on a vital bailout package stalled this year, and one of the cabinet’s first tasks would have been to restart the negotiations.

There was no immediate comment from Paris about Adib’s resignation.

A senior Lebanese political source said much now depended on whether the French would give up. Macron said when he launched the plan that he was gambling his political capital on it.

The cabinet formation hit a roadblock over a demand by Lebanon’s two main Shi’ite groups, Amal and the heavily armed Iran-backed Hezbollah, that they name several ministers, including finance, a position previously held by a Shi’ite.

Adib held several meetings with senior Shi’ite politicians but failed to reach agreement on how the minister would be chosen.

Shi’ite leaders feared being sidelined as Adib sought to shake up appointments to ministries, some of which have been controlled by the same faction for years, politicians said.

Former Prime Minister Saad al-Hariri, a leading Sunni politician, said in a statement that anyone celebrating the collapse of Macron’s initiative “will bite your fingers in regret.”

The street value of the Lebanese pound, which has plunged from an official peg of 1,500 to the dollar since the economic crisis erupted last year, weakened further after the news. One trader said it was now trading at 8,200 from 7,700 on Friday.