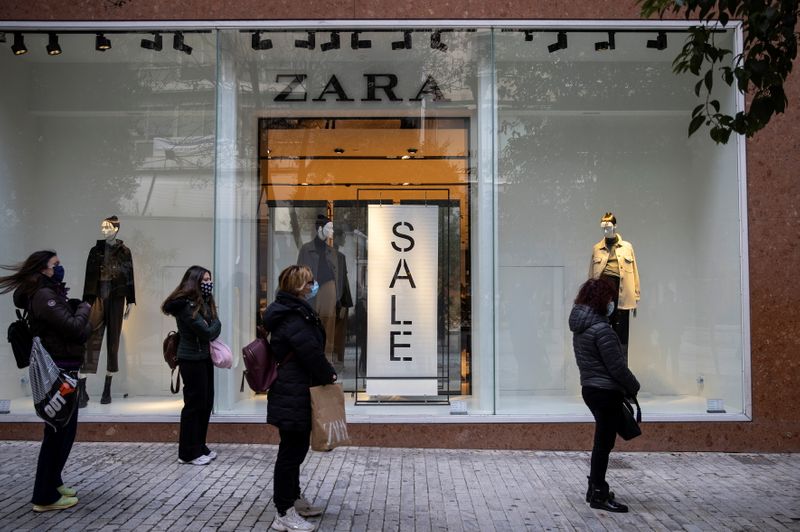 © Reuters. First day of the re-opening of retail stores, amid the coronavirus disease (COVID-19) pandemic, in Athens

ATHENS (Reuters) – Shops in Greece reopened for the first time in two months on Monday as the government took its first steps towards easing coronavirus restrictions to try to breathe life into the retail sector.

Retailers selling non-essential items were allowed to serve customers under heavy restrictions, with shoppers required to register by instant message and book appointments with hair salons. But businesses welcomed the first sign of a return to normality.

“It’s a very positive development,” said Giannis Chatzitheodosiou, president of the Athens trade chamber, adding that both businesses and shoppers were being asked to stick to strict safety guidelines.

“One in four businesses will never open again, we are fighting for the remaining 75% to survive.”

While Greece has succeeded better than many other European countries in limiting the spread of the virus, it has suffered more than 5,000 dead and its health system, badly weakened after years of financial crisis, has been under severe strain.

Its economy is expected to have shrunk by more than 10% last year after two lockdowns and a disrupted summer tourist season, and the government spent some 24 billion euros ($29 billion) to support businesses and employees hit by the restrictions.

In Ermou, one of Athens’ main shopping streets, people formed long queues outside stores and boutiques that imposed strict social-distancing limits inside. But businesses were also worried about the long-term economic fallout from the crisis.

“There is joy (of course) but the thing is for everything to go well, and not to close down again, because it’s not the easiest environment to survive in right now,” said Kostas Apostolopoulos, who owns a hat shop in central Athens.

While stores were allowed to re-open and authorities have begun rolling out vaccinations, other restrictions remained in place, with a ban on public gatherings and compulsory mask-wearing in public.

On Monday, health authorities reported 320 new cases and 19 related deaths, bringing COVID-19 infections since the first case was detected in February to 148,925 and deaths to 5,488.