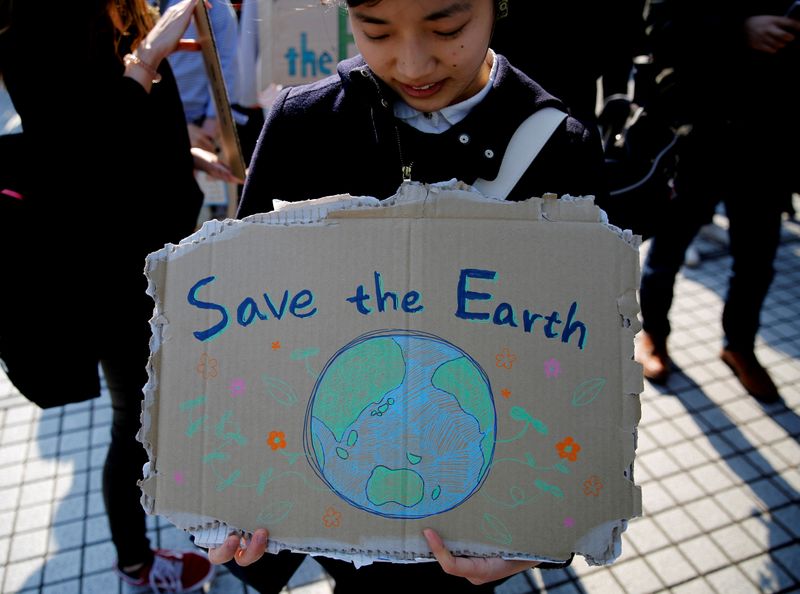 © Reuters. FILE PHOTO: A school student holds a sign as she takes part in the global students strike for action on climate change in Tokyo

By Daniel Leussink and Tetsushi Kajimoto

Suga has vowed to cut greenhouse gas emissions to zero in 2050, bringing Japan in line with the European Union and ahead of China’s pledge to achieve the same goal by 2060.

In a nod to Suga’s ambition, his ruling Liberal Democratic Party (LDP) has proposed tax exemptions for firms that increase carbon-free investment, a document obtained by Reuters showed.

It also proposed extending by two years tax reductions for environment-friendly cars and cutting the tax charged on aviation fuel to help airlines hit by COVID-19, the document showed.

The proposal, to be finalised after approval by Komeito Party, the LDP’s coalition partner, later on Thursday, will serve as a platform for the government’s tax policies for the year beginning in April.

The tax plan would follow Japan’s decision on Tuesday to compile a $708 billion economic stimulus package that features support for green and digital innovation.

Suga’s administration sees green innovation as a key area for Japanese business investment that could give the economy a much needed boost.

While Japanese carmakers have seen sales rebound from the pandemic’s hit, they have lagged their global peers in the race to develop electric vehicles.