Japan may not attend summit in Korea due to wartime labour dispute: media 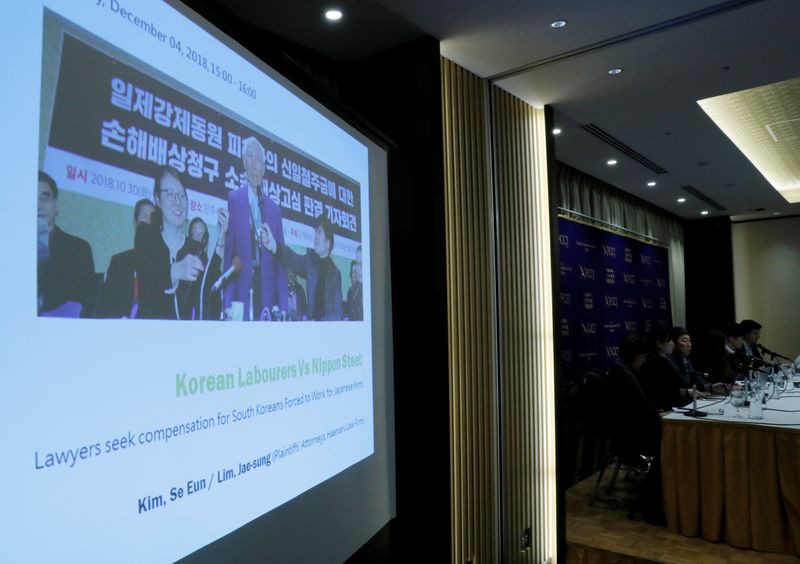 © Reuters. FILE PHOTO: A projection shows an image of a plaintiff who was forced to work for Japanese firms during World War Two and seeks compensation during a news conference in Tokyo

TOKYO (Reuters) – Japan may not attend a leaders’ meeting with South Korea and China this year unless “proper measures” are taken in a dispute with South Korea over compensation for wartime forced labour, Japanese media said on Tuesday.

Ties between the two Asian neighbours soured after South Korea’s Supreme Court in 2018 ordered a Japanese steelmaker to pay compensation for forced labour, which prompted Japan to impose export curbs on some key high-tech materials.

South Korea is set to host the trilateral summit, held roughly once a year, but Kyodo news agency quoted diplomatic sources as saying it would be “impossible” for new Japanese Prime Minister Yoshihide Suga to visit unless Japan’s concerns over the issue were addressed.

This view had been conveyed to South Korea, Kyodo said.

Japanese Foreign Minister Toshimitsu Motegi did confirm or deny the report but pointed out that the meeting itself had not been scheduled.

“When it comes to the Japan-China-South Korea summit, nothing has been decided at the moment including concrete dates,” Motegi said, when asked about the report at a regular news conference.

The South Korean Supreme Court ruled in 2018 that Nippon Steel Corp should pay compensation to four South Koreans for forced labour during World War Two, and a lower court in 2019 approved the seizure of part of the assets of the company.

Nippon Steel filed an appeal against the ruling in August.

Japan argues the ruling violates international law because all claims for compensation rising from Japan’s 1910-1945 colonisation of the Korean peninsula were settled under a 1965 treaty.

Suga, who took office last month, called for both countries to repair their frayed ties in his first conversation with South Korean President Moon Jae-in.

But Suga also later said Japan would “continue to firmly seek appropriate action from South Korea”. He did not elaborate.