Ivory Coast president’s supporters and opponents clash ahead of election 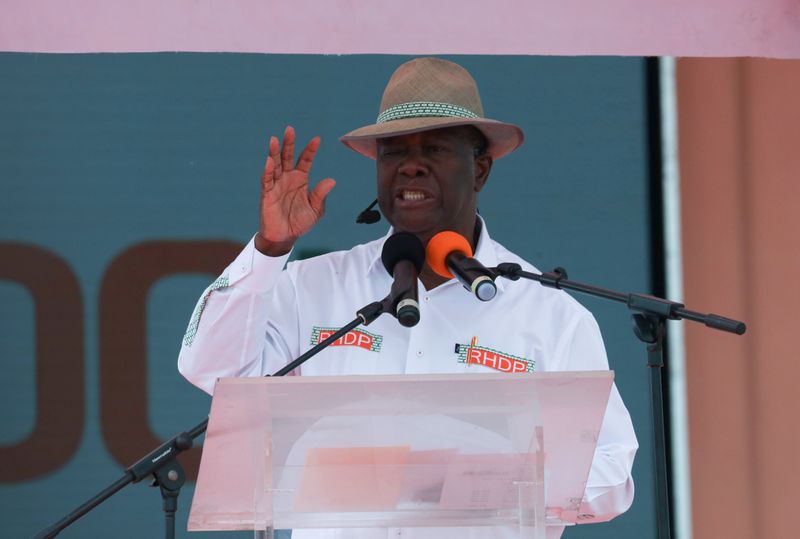 ABIDJAN (Reuters) – Local offices of Ivory Coast’s ruling party were ransacked and the house of an opponent of President Alassane Ouattara was set on fire, as rival supporters clashed in an eastern city ahead of the presidential election, residents said on Saturday.

The clashes in Bongouanou came after the opposition candidate, former premier Pascal Affi N’Guessan, and Ouattara’s other main challenger, former president Henri Konan Bedie, had on Thursday called on their supporters to boycott the Oct. 31 vote and prevent it from going ahead.

More than a dozen people have been killed since August in protests against Ouattara’s candidacy for a third term, which his opponents say violates the constitution.

“When Affi called for the disruption of the campaign and the election by all means, some young people went to the office of the RHDP (the ruling party) and broke everything there,” Ferdinand Kouamé, a teacher in Bongouanou, told Reuters.

“There was a fight between the youths of the RHDP and the opposition,” Kouamé said. “They resumed this morning and the house of Affi was burned.” Restaurants and other houses were also attacked, said another resident.

Jean Bonin, an adviser to Affi, said he was waiting for the results of a police investigation into the fire.

A police spokesman said several people had been injured in the clashes but there were no deaths.

Affi is representing the party of former president Laurent Gbagbo, whose refusal to concede defeat to Ouattara after the 2010 election sparked a brief civil war in the world’s top cocoa producer that killed 3,000 people.

Affi and Bedie, who was president from 1993 to 1999, accuse the ruling party of manipulating the electoral process to ensure Ouattara’s victory.

Ouattara denies this and says he has the right to stand for re-election under a new constitution approved in 2016.