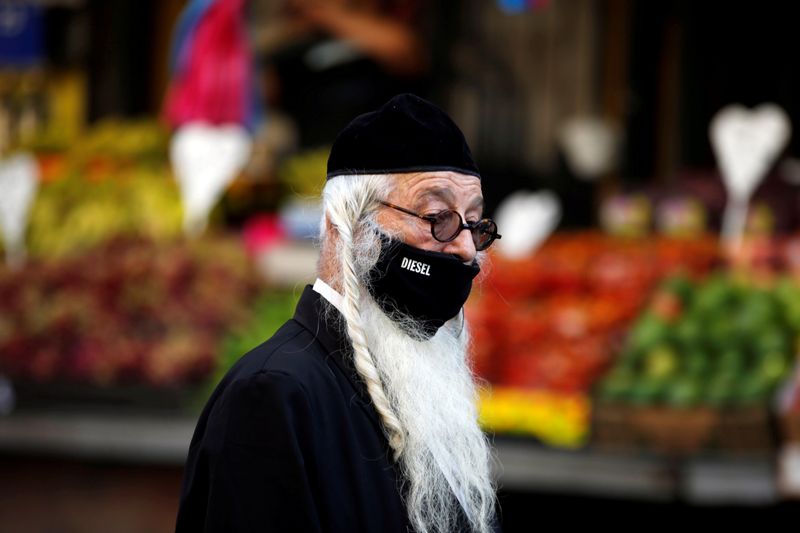 © Reuters. A man shops in a main market ahead of Yom Kippur, the Jewish Day of Atonement as Israel is set to tighten its second nationwide coronavirus disease (COVID-19) lockdown amid a rise in infections, later today, in Jerusalem

TEL AVIV (Reuters) – Israel was set to impose a tighter nationwide COVID-19 lockdown on Friday as critics accused Prime Minister Benjamin Netanyahu of trying to curb protests against his handling of the health and economic crises.

Netanyahu’s government decided on Thursday to tighten a three-week lockdown imposed on Sept. 18, but parliament has not yet approved the measures, which include new limits on public demonstrations.

The restrictions will come into effect at 2 p.m. (1100 GMT) on Friday, just ahead of the Israeli weekend.

They will force Israelis to stay mostly at home, shut down most businesses and restrict group prayer during the approaching Jewish high-holiday season, which includes Yom Kippur.

But while Netanyahu’s government is authorised to impose measures it deems urgent, including most restrictions on movement, any restrictions on citizens’ rights to protest require parliamentary approval.

With parliament deadlocked over the protest measures, Netanyahu’s right-wing Likud party said it had proposed “emergency regulations for a few days to prevent mass demonstrations that would cause the public to disregard the closure and endanger many lives”.

Demonstrators have been gathering weekly outside Netanyahu’s Jerusalem residence, criticising him over the economy, the pandemic and corruption allegations. He denies all wrongdoing.

The new lockdown rules will in part restrict attendance at street protests to within 1 kilometre (0.6 miles) of citizens’ homes, effectively shutting down the demonstrations outside Netanyahu’s gate.

However, Defence Minister Benny Gantz wrote on Twitter: “We will not allow emergency regulations to be used to prevent demonstrations.”

“The decision on a stringent lockdown was designed to stop the spread of the virus, not to block protests,” he said.

Without mentioning the curbs on protests, Netanyahu defended the new measures on Thursday, saying that Israelis had not complied with social distancing requirements.

“Wake up. Enough is enough. We are in a different reality. Something needs to be done and it must be done now. A tight lockdown, especially during the holidays, when the economic cost is much lower,” he said in public remarks.

A first lockdown was imposed in Israel in late March and eased in May as new cases tapered off. But infections have surged again in recent weeks, reaching daily highs of more than 7,000.

A survey published by the non-partisan Israel Democracy Institute on Wednesday showed only 27% of Israelis trust Netanyahu’s handling of the coronavirus crisis.